What Does Black Stool Indicate and How is it Treated?

Black stool is a condition, in which the stools appear dark or blackish in color. Black stools are sometimes caused by intake of some medicines or certain foods that are rich in iron. While it can be a normal occurrence in some cases, sometimes, black stool indicate the presence of an underlying medical condition. Black stool can be due to presence of blood in it and is called melena. 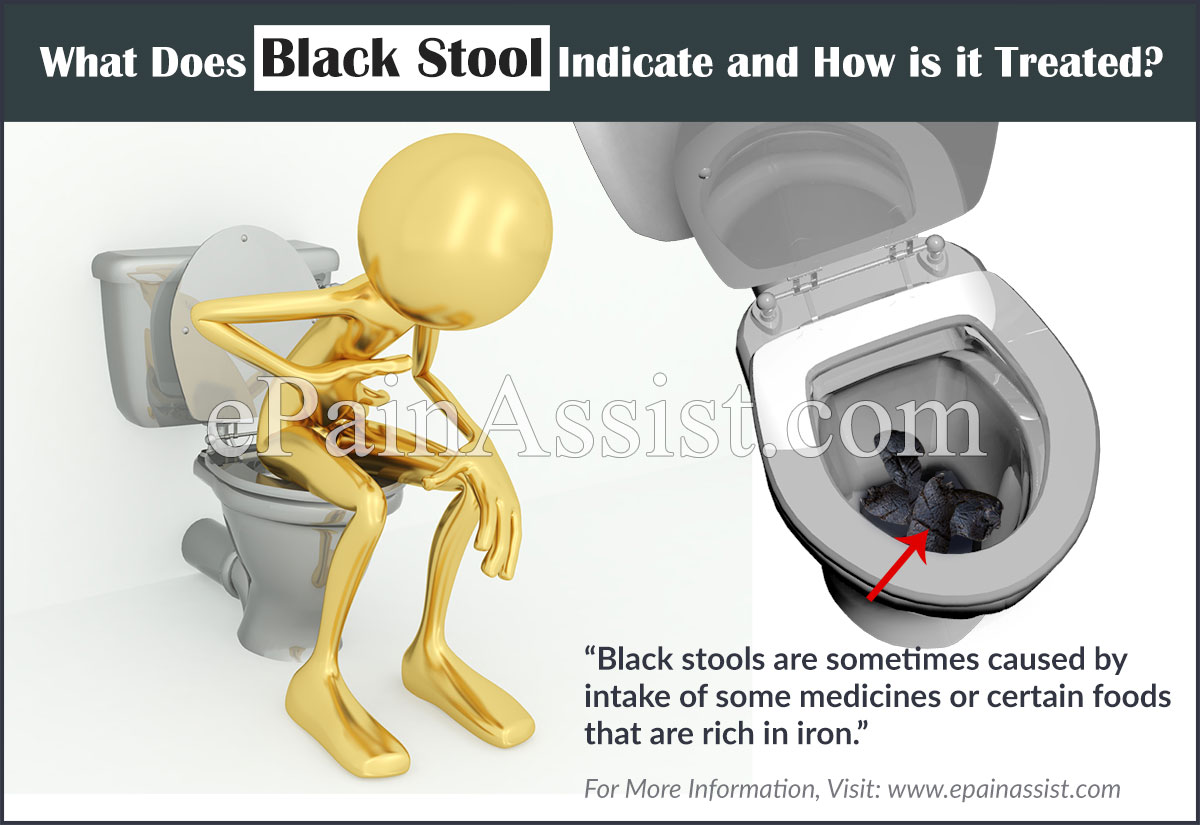 Black stool is often a symptom associated with other gastrointestinal complaints and can potentially indicate a stomach related problem. Black stool often appears tarry, can have a foul smell and may show abdominal discomfort too. Stools can appear black due to the presence of blood in it. Bleeding can possibly be from upper gastrointestinal tract and as it passes through the tract and gets exposed to various digestive secretions, it often turns black or tarry.

Black stools can be a result of various causes, out of which some maybe serious medical conditions too.

What Does Black Stool Indicate?

Black stool indicates a possible intake of substances that cause changes in color of stools or an underlying gastrointestinal problem. Some of the causes that can lead to black stool include

Common Conditions that Can Cause Black Stool:

Black stool can be normally a result of consumption of foods like iron rich – spinach, blueberries and black licorice. Intake of iron supplements, lead or other medicines containing bismuth too can cause black stools.

Esophageal Conditions that Can Cause Black Stool:

Conditions affecting the esophagus, which is the tubular part above the stomach can cause bleeding. Such bleeding enters into the digestive tract and results in black stools, which contain occult blood. Such conditions include, severe esophagitis (inflammation of esophageal inner lining) or esophageal ulcers (ulcerations of mucosa). Esophageal varices, in which distended blood vessels rupture to cause bleeding can be a medical emergency that needs immediate attention.

Gastritis, which is inflammation of stomach lining and gastric ulcers that can be caused by intake of medicines and painkillers, too can cause bleeding. Bleeding gastric ulcers or peptic ulcers (ulcers in small intestine) often pass small amounts of blood into the digestive tract, which leads to black stool.

Another medical emergency condition affecting the bowel, necrotizing enterocolitis, can cause severe inflammation and death of lining of intestine and cause black stool. Intussusception, another potentially fatal condition, in which a portion of intestine gets folded causing blocking of regular passage, can cause formation of black stool.

Other Causes of Black Stool:

Radiation therapy taken as a treatment part can affect the body and sometimes cause black stools. Occasionally, transfusion reactions that occur as a result of reaction to a blood transfusion given to a patient due to improper matching of blood group. Allergic response of blood vessels causing thickening of blood vessels and bleeding, called vasculitis. Some rare bacterial infections like anthrax can cause bleeding and black stools, which is often a medical emergency.

How is the Problem of Black Stool Treated?

Black stool is not necessarily always seen by naked eye. Stool examination and laboratory tests, when performed can detect the presence of occult blood in stool. Black stools need to be attended in time, otherwise, if the cause is internal bleeding, it will continue and can lead to potential complications like severe blood loss, anemia, shock and increased severity of the primary condition like cancer.

Treatment for black stool involves, identifying the cause and performing investigations related to possible causes. History includes the duration and severity of black stools. History of existing medical ailments, episodes of bleeding from rectum, any gastrointestinal complaints, record of ongoing medications and nutritional supplements, etc.

Investigations to diagnose the cause of black stool usually include blood and stool examination and abdominal scans. Barium meal studies, endoscopy and other advanced investigations may be required.

If bleeding is severe or the identified cause of black stool is serious, immediate hospitalization and emergency medical care may be required. For other causes of black stool, medical treatment is given depending on the cause. Antacids, antibiotics, medications that heal ulcers, relieve inflammation of the colon are usually given. Certain medications, if found to be causing black stools, may be stopped or replaced.