What are Nasal Polyps, Know its Causes, Symptoms, Treatment

Amongst the many benign growths that develop in the body, one of the most common ones is nasal polyp. These benign or non-cancerous growths are basically inflammatory conditions that occur in the nasal lining or sinus due to swelling of the lining. 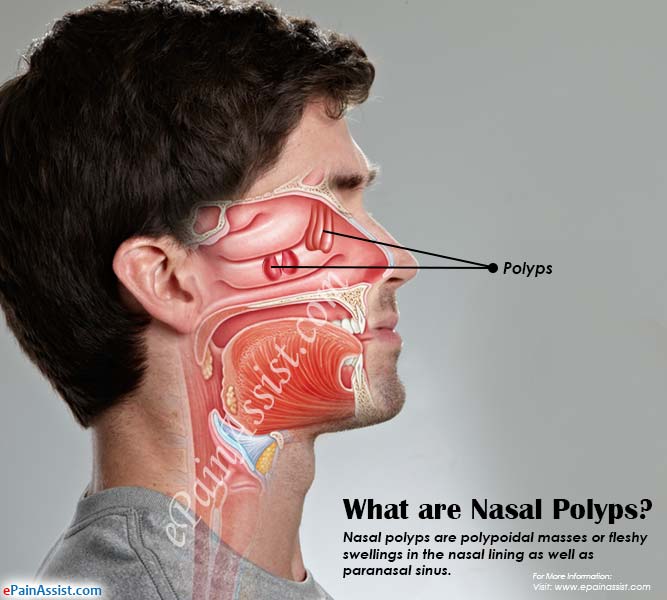 What are Nasal Polyps?

Nasal polyps are polypoidal masses or fleshy swellings in the nasal lining as well as paranasal sinus. The sinus is the space behind the eyes, nose and cheeks that is filled with air. The polyps look like tear-drops and when they are mature, they look like peeled grapes. They are pink or yellowish brown in colour. However, they cause no pain. In fact, if the polyps are in small size, they do not cause much significant symptoms or troubles. It is only the larger polyps that cause the problems.

The most common symptoms associated with nasal polyps are –

However, these symptoms vary from person to person, depending on the size of the nasal polyp.

Nasal polyps are quite common and about 1 to 20 people can be found to have them. Around 25-30% of the population across the world population develops the condition at some point of time in their life. However, in most cases, the risk of developing nasal polyp is higher with those, who have crossed the age of 40. Men are 4 times more likely to develop nasal polyp than women. However, children, below the age of 10 rarely develop this condition.

The risk factor for nasal polyps is higher in case of patients of asthma and cystic fibrosis. Apart from these, allergic rhinitis, Churg-Strauss syndrome, aspirin allergy and sinusitis also increases the risk factor associated with nasal polyps.

The exact causes of nasal polyps are not clearly known. However, experts believe that chain of events and step by step development of certain conditions and diseases lead to the growth of nasal polyps. The main cause of the nasal polyps is usually associated with mucosa and the inflamed tissue. The mucous layer inside the nose is very important that helps the air that we breathe in to be humidified, and thus protect the inside layer of the nose. When an infection or inflammation of the mucous layer occurs, the mucosa layer becomes red and swollen. It starts to drip from your nose and this continuous dripping causes the nasal polyps to grow.

In simple terms, the polyps are formed as a result of accumulation of fluid in nasal and sinus cells. The fluids, due to the gravity, are pulled downwards and they form the nasal polyps. Though infection and inflammation of the mucous layer and sinus is mostly associated with the occurrence of these nasal polyps, often certain other diseases and conditions work as a trigger. These are the ones that are also considered the risk factors for nasal polyps.

After checking the symptoms and examining the nose with a lighted instrument, the doctor will diagnose the stage. In most cases, the symptoms and the clinical diagnosis by an ENT specialist is enough to diagnose the presence of nasal polyps in the patients. Otherwise, in case the polyps are not properly visible, the doctor will recommend certain tests.

While diagnosis, the doctor will also be able to understand the nature of the polyps. Though nasal polyps in one nostril are very rare, in some cases these can be cancerous. Further tests might have to be done to check for malignancy.

There is no permanent cure for the nasal polyps and there is a high chance that if infection and irritation of the nose persists, your nasal polyps will recur even after being completely cured. Still, certain treatments are there that can help you in getting rid of the nasal polyps.

As nasal polyps are highly associated with infection and inflammation, it is safe to stay away from allergens and irritants. Maintaining good nasal hygiene, rinsing the nose and humidifying the home may reduce the risks or chances of acquiring infection or irritation and thus reduce the chances of nasal polyps. Seeing a doctor for suitable treatments and best preventive methods is a best idea. If you undergo a surgery, make sure you maintain doctor’s instructions properly.