What is Sneddon Syndrome?

Sneddon Syndrome is an extremely rare pathological condition which affects the small and medium sized blood vessels and arteries. Sneddon Syndrome is characterized by a distinct skin condition called livedo reticularis in which there is bluish discoloration of the skin surrounding the normal skin.

Sneddon Syndrome is also characterized by various neurological abnormalities to include mini strokes, headaches, and dizziness. The exact cause of Sneddon Syndrome is not known but the symptoms are caused basically due to narrowed arteries resulting in decreased blood flow to the brain causing conditions like cerebral ischemia resulting in strokes.

Individuals with Sneddon Syndrome tend to also have abnormally high blood pressure and heart defects. Intellectual disability and memory loss are also some of the features of Sneddon Syndrome. The neurological abnormalities along with the distinct skin condition differentiate other medical conditions from Sneddon Syndrome. 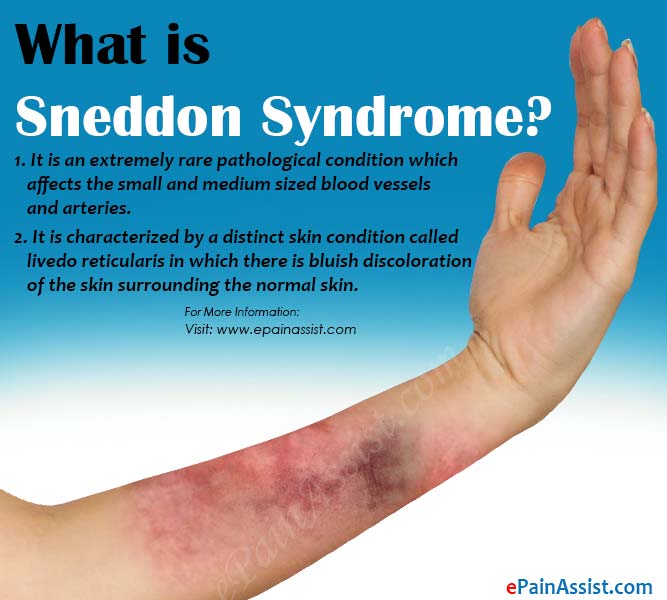 What are the Causes of Sneddon Syndrome?

In some cases there has been more than one family member diagnosed with Sneddon Syndrome supporting the possibility of this being a familial or inherited condition.

The symptoms of Sneddon Syndrome are caused due to increase in the number of cells in the walls of the affected arteries. This results in the arteries getting narrowed due to the cell buildup. Because of this, there is significant decrease in the blood flow.

The arteries may also get occluded and prevent blood from flowing smoothly resulting in some areas or tissues not getting enough blood causing them to get thrombosed.
In some cases, clumps of cells may break loose from the main artery and start to flow with the bloodstream and then get lodged in some artery blocking the blood flow to that artery resulting in tissue necrosis as a result of reduced blood supply due to Sneddon Syndrome.

What are the Symptoms of Sneddon Syndrome?

The classic presenting feature of Sneddon Syndrome is what is known as livedo reticularis which is a ring of bluish discoloration of the skin surrounding normal skin. It mostly affects the arms and legs but may also affect the trunk and the hip region. This condition tends to get worse in the winter months and during pregnancy.

Another symptom of Sneddon Syndrome is the onset of mini strokes and strokes due to cerebral ischemia as a result of blood clots which reduce the flow of blood to the brain causing strokes. The symptoms may be variable and differ from individual to individual depending on the arteries that are blocked.

These episodes of mini strokes or strokes may be recurrent in Sneddon Syndrome. Additionally, there may be some neurological symptoms to include difficulty concentrating, memory loss, confusion, vision disturbance, and hemiparesis. Cognitive disability is also one of the symptoms of Sneddon Syndrome.

How is Sneddon Syndrome Diagnosed?

How is Sneddon Syndrome Treated?