COPD or Chronic Obstructive Pulmonary Disease is a broad term used to describe chronic conditions and diseases of the lungs. In COPD, patient has progressive and slow obstruction of airflow into the lungs or out of the lungs. COPD or Chronic obstructive pulmonary disease has many causes of which the primary cause is exposure to tobacco smoke and cigarette smoking. Other causes of COPD are air pollution, genetic conditions and infectious diseases.

The prevalence of COPD has increased twice since 1982. COPD is slightly more common in men than women. The symptoms of COPD or Chronic obstructive pulmonary disease which include coughing, shortness of breath etc become obvious slowly which leads to late diagnosis of COPD often after the age of 40 to 50. There are some people though who get diagnosed at a younger age. The symptoms of COPD experienced by the patients consist of chronic bronchitis, asthma and emphysema. 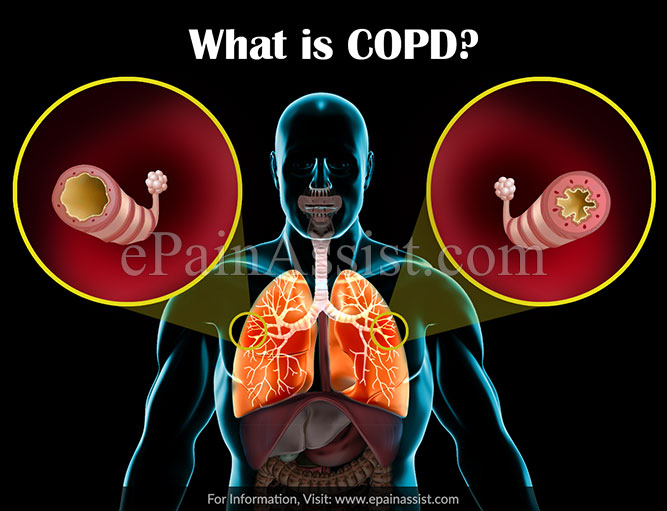 What are the Causes of COPD?

What are the Risk Factors for COPD?

What are the Signs & Symptoms of COPD?

COPD or Chronic obstructive pulmonary disease is a disease which is slowly progressive; so it is not uncommon to find the initial signs and symptoms a little bit different from the symptoms experienced in the late stages of this disease. Symptoms are the common base upon which the stages of COPD are classified.

Productive cough is the main initial symptom of COPD. The sputum can be colorless or with a white mucus

Shortness of breath or breathlessness (dyspnea) is the most significant symptom of chronic obstructive pulmonary disease. In the initial stages of COPD, dyspnea can occur occasionally with exertion which gradually progresses to breathlessness upon doing simple tasks, such as walking to the bathroom or standing up. In some patients, wheezing can also develop which is a hissing or a whistling sound while breathing.

Other general signs and symptoms of COPD or chronic obstructive pulmonary disease are:

As the COPD worsens from mild to moderate, the severity of the symptoms also increases and consists of:

What are the Stages of Chronic Obstructive Pulmonary Disease?

Are There Any Other Medical Conditions/Diseases Which Contribute to COPD?

There are three non-genetic medical problems of lung tissue which contribute to COPD and these are:

What Types of Doctors Treat COPD?

How is the Diagnosis of COPD Made?

Imaging tests done to diagnose COPD are: Chest X-ray, CT scan of the lungs, Arterial Blood Gas or a pulse oximetry to measure the saturation level of oxygen in blood. Other than this, patient is also referred to a pulmonologist (lung specialist) for assessing their FEV1 level.

What is the Treatment for COPD or Chronic Obstructive Pulmonary Disease?

There are various treatments for chronic obstructive pulmonary disease and the most effective treatment and the best treatment which should be implemented immediately is to stop smoking.

Is the Treatment Different for Different Stages of COPD?

Treatment for chronic obstructive pulmonary disease depends on the stage of COPD:

Treatment for Stage I of COPD: Patient needs short-acting bronchodilators.

What are the Medications Used in Treatment of COPD?

This is the first line of treatment for smoking cessation. Nicotine replacement therapy helps the patients to quit smoking and using this treatment also decreases the withdrawal symptoms. Nicotine Replacement Therapy comprises of nicotine-containing chewing gum and nicotine patches to be applied on the skin through which the nicotine gets absorbed via the skin. Doing this therapy helps in the nicotine getting gradually withdrawn from the body and helps the patient in successfully quitting smoking.

Oral Medications/Inhalers for Treating the Symptoms of COPD

What are the Surgical Treatments for COPD or Chronic Obstructive Pulmonary Disease?

Surgery is not always desirable or possible for many patients suffering from COPD. There are 3 types of surgery done for chronic obstructive pulmonary disease:

Bullectomy: This surgery involves the removal of giant bullae which are the air-filled spaces commonly occurring on the periphery of the lung. These giant bullae occupy lung space usually in patients with emphysema. Giant bullae can occupy more than 32% of the lung tissue which leads to compression of adjacent lung tissue and also restricts ventilation and blood circulation to healthy tissues. By doing bullectomy, the compressed lung tissue which is still functional can expand.

Lung Volume Reduction Surgery: This surgery consists of removing the lung tissue which has been most damaged by tobacco smoking. This usually comprises of 20% to 30% of the lung tissue present in the upper part of each lung. Lung volume reduction surgery is not a frequently done procedure and is done on patients having severe emphysema and marked hyperinflation of the air spaces and airways.

Lung Transplant Surgery: This surgery is done in patients suffering from advanced lung disease. Patients suffering from chronic obstructive pulmonary disease are the largest single category of individuals who undergo lung transplantation. More often, these patients with chronic obstructive pulmonary disease are at COPD stage 3 or 4 with severe symptoms and with lung transplantation they may have an average life expectancy of around two years or less.

What is the Aim of Treatment of COPD?

The aim of treatment and management of chronic obstructive pulmonary disease is:

Does a Patient with COPD Need to be Hospitalized?

The patient needs to be hospitalized if he/she develops acute exacerbation of chronic obstructive pulmonary disease, severe respiratory dysfunction, or if they have other serious respiratory diseases such as acute bronchitis or pneumonia. The main purpose of hospitalization is treating the symptoms of COPD and preventing further deterioration of the condition.

The patient may need to be admitted to ICU (intensive care unit) for invasive or noninvasive mechanical ventilation or hospitalization is needed in case of development of these symptoms: lethargy, confusion, respiratory muscle fatigue, respiratory acidosis and worsening hypoxemia.

What are the Lifestyle Changes Recommended for Patients with COPD?

Smoking Cessation. As mentioned before the, the most effective and preventative therapy for COPD is quitting smoking and avoiding any exposure to tobacco smoke.

There are various over-the-counter (OTC) foods and supplements which are thought to help in reducing symptoms of COPD; however, patients with COPD should discuss with their doctor before starting any of these supplements or home remedies as such type of treatments can interfere with their ongoing therapy. Dietary and supplementary treatment for COPD includes:

Supplemental Therapies to Treat the Complications & Symptoms of COPD

Supplementary therapies for COPD include antibiotics to reduce pathogen damage to lung tissue, mucolytic agents and oxygenation therapies; all these help in reducing the symptoms of COPD. Many patients benefit from oxygen therapy where it increases their life expectancy and improves their quality of life. Oxygen therapy also helps with exercise endurance.

Preventive measures for COPD include:

What is the Prognosis & Life Expectancy of Chronic Obstructive Pulmonary Disease?