Histoplasmosis– This is a medical condition brought on as a result of inhalation of spores of a fungus usually found in droppings of birds. Other names for Histoplasmosis are Caver’s Disease, Spelunker’s Lung; this disease is usually transmitted when these spores get airborne, usually during cleaning. 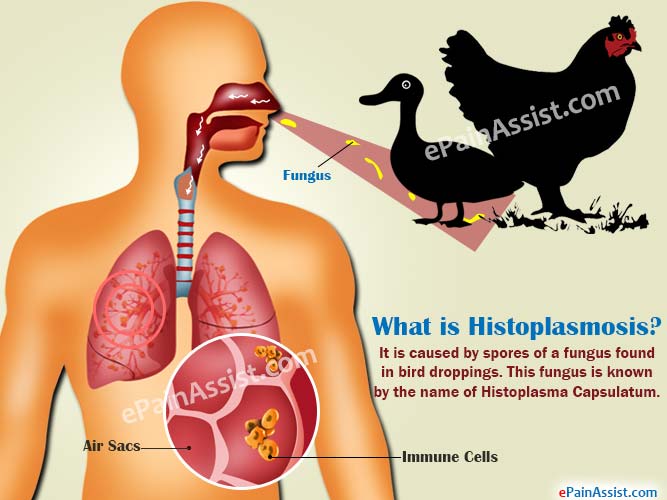 Histoplasmosis as stated is a disease which is caused by inhalation of spores of a fungus, which is usually found in bird droppings and is transmitted into humans when these spores become airborne during cleaning activity. It can also be transmitted by soil, which has been contaminated by bird droppings thus farmers and landscapers tend to be at higher risk for developing this disease. Histoplasmosis rarely causes any symptoms; in fact, affected individuals are not even aware that they are suffering from Histoplasmosis, but in some instances especially newborns and those individuals with a weak immune system Histoplasmosis can take a serious turn. There are treatments available to treat even the most serious forms of Histoplasmosis.

Histoplasmosis as stated is caused by spores of a fungus found in bird droppings. This fungus is known by the name of Histoplasma Capsulatum. These spores are very light and can float in air for miles when contaminated soil or other material is disturbed, especially during cleaning. This fungus is especially active in damp conditions hence this fungus is found usually in chicken and pigeon coops, old barns, caves, parks etc. Exposure to bat droppings or bat guano can also cause Histoplasmosis. Histoplasmosis is in no way a contagious disease.

The People Who Are At Risk For Developing Histoplasmosis Are:

As stated Histoplasmosis rarely causes any symptoms, but in case if an individual with a compromised immune system or a newborn gets infected then the following symptoms may be observed:

As stated earlier, there is no treatment required for mild forms of Histoplasmosis, but a definitive treatment is required for people with compromised immune systems and newborns. Treatment is usually done using antifungal agents. These medications are usually available in the form of oral tablets but in case of severe symptoms, treatment is given intravenously.

How Can Histoplasmosis Be Prevented?