Prolactinoma is a medical condition in which there is a benign tumor in the pituitary gland, which starts producing excessive hormone called prolactin. This increased production of prolactin results in significant decrease in libido in affected people. Even though Prolactinoma is not a serious medical condition, but it can cause certain complications like visual impairment and infertility among others. Prolactinoma is usually treated with medications which brings the prolactin level back to normal and surgical procedure is done to remove the tumor from the pituitary gland.

What Are The Causes Of Prolactinoma?

A definitive cause of Prolactinoma is still under investigation but some of the causes of Prolactinoma may be certain medications, some other form of tumor of the pituitary gland, abnormality in the thyroid gland, chest injury, or pregnancy along with breast-feeding. 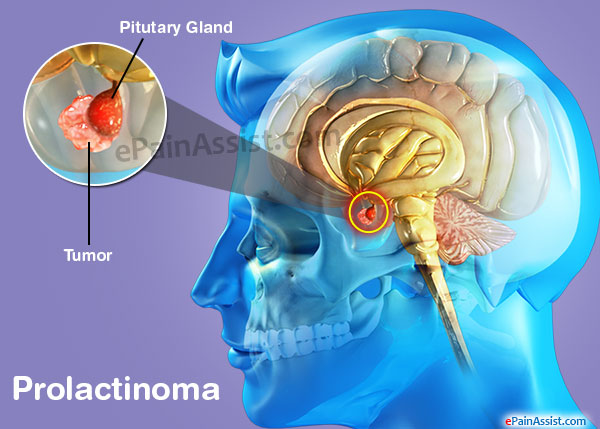 What Are The Symptoms Of Prolactinoma?

At times, there may be no noticeable signs or symptoms of Prolactinoma. The signs and symptoms that develop are usually caused by overproduction of prolactin in blood or in case the tumor is quite large, then it may put pressure in the surrounding tissues. A significant decrease in libido is observed if the prolactin levels are high in the blood.

How Is Prolactinoma Diagnosed?

To Diagnose Prolactinoma, The Following Tests Are Done:

What Are Treatments For Prolactinoma?

The main aim of treatment of Prolactinoma is:

Prolactinoma is treated mainly by medications and surgery.

Surgery: If the above mentioned medications are not useful in treating prolactinoma and the prolactin levels are still significantly high then surgery is recommended for getting rid of the tumor and relieving symptoms and also normalizing prolactin levels. The surgical procedure to be done depends on the size of the tumor and the degree of it. Some of the surgical procedures done for Prolactinoma are:

Transsphenoidal Surgery: In this procedure, the tumor is removed from the pituitary gland through the nasal cavity. This surgery rarely has any complications and there are no scars that are visible postsurgery.

Transcranial Surgery: This procedure is done if the size of the tumor is quite large and it has spread to nearby tissues. This procedure is also called as craniotomy. In this procedure, the tumor is removed through the upper part of the skull. The result of the surgery depends on the size of the tumor and where is it located. If the prolactin levels are significantly elevated then the chances of them getting back to normal even after surgery is pretty low but in majority of the cases the prolactin levels come back to normal after the surgery.