What is Odynophagia: Causes, Symptoms, Treatment

Odynophagia is a pathological condition in which the affected person experiences extreme pain when swallowing be it food, liquids, medication pills and the like. This causes the food for example to take a lot of time to reach the stomach from the esophagus resulting in a stabbing pain in the chest. Odynophagia can be confused with another condition called dysphagia but these two conditions are different in that Odynophagia causes pain with swallowing whereas in dysphagia the individual has difficulty swallowing food altogether even though these two conditions can occur hand in hand.

The pain caused due to Odynophagia can be from the mouth, esophagus, or throat. Odynophagia is a condition which can happen to anyone irrespective of the age or gender. 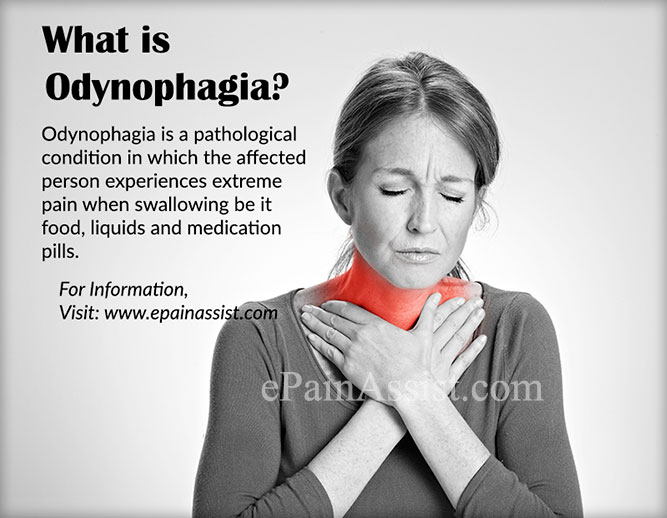 Some of the possible causes for Odynophagia are:

Odynophagia Caused Due to Inflammation and Ulcers: Even if an individual does not have an infection then also he or she may end up having inflammation or ulceration of the throat or the esophageal area which may result in Odynophagia. Laryngeal inflammation may also lead to Odynophagia.

Odynophagia Caused Due to Tumors: This is also one of the causes of Odynophagia. Cancer of the mouth, throat, and esophagus are some of the conditions which can cause Odynophagia. If Odynophagia is accompanied by unintentional weight loss then this should be taken as a possibility especially in high risk patients like smokers.

What are the Symptoms Accompanied With Odynophagia?

Dysphagia is one symptom that more often than not goes hand in hand with Odynophagia. The individual may also complain of pain in the mouth which intensifies when the individual is swallowing. If an individual has Odynophagia on eating hot food or drinks and if it is present more in the mornings it could be related to GERD. Sometimes Odynophagia may be accompanied by severe shortness of breath or dysphonia indicating a problem with the larynx or the voice box or some sort of obstruction of the throat.

How is the Cause of Odynophagia Diagnosed?

If there is no obvious cause identified for the Odynophagia, then the physician may need to conduct some studies to find out the cause of Odynophagia. In cases of reflux if the individual starts experiencing pain with eating then the possibility of cancer need to be investigated especially if there is unintentional weight loss also reported. If the food regurgitates from the esophagus and causes Odynophagia then this also may be a possibility of cancer. The main test to find out a definitive cause for Odynophagia is an endoscopy. Barium swallow study can also be done but is rarely used these days. In case if endoscopy does not show a definite cause then manometry studies may have to be done to find out a confirmatory cause for Odynophagia.

How is Odynophagia Treated?

It is quite obvious that the treatment for Odynophagia depends on what is actually causing the condition. Some methods used for treating Odynophagia are: