What Can Cause Stabbing Pain?

Acute or chronic pain is characterized as sharp, burning, stabbing, penetrating and colicky pain. Acute pain lasts for less than 3 to 6 months. Pain is known as chronic pain when it lasts more than 6 months. Acute pain is mostly a nociceptive pain, which is often caused by irritation of peripheral receptors and nerve ending. Chronic pain is mostly mixed pain. Mixed pain could be nociceptive as well as neuropathic pain. Neuropathic pain is caused by abnormalities in transmission of pain impulses at spinal cord and brain. Pain transmission abnormalities are caused by abnormal secretion of neurotransmitters and behavioral changes of pain receptors of neurons (nerve cells) within spinal cord and brain. Nociceptive pain is defined as sharp, penetrating and stabbing pain. Neuropathic pain characterized as burning and stabbing pain is often described as allodynia and hyperalgesia. Stabbing pain should be investigated as soon as possible. Stabbing pain often precedes life threatening situations. 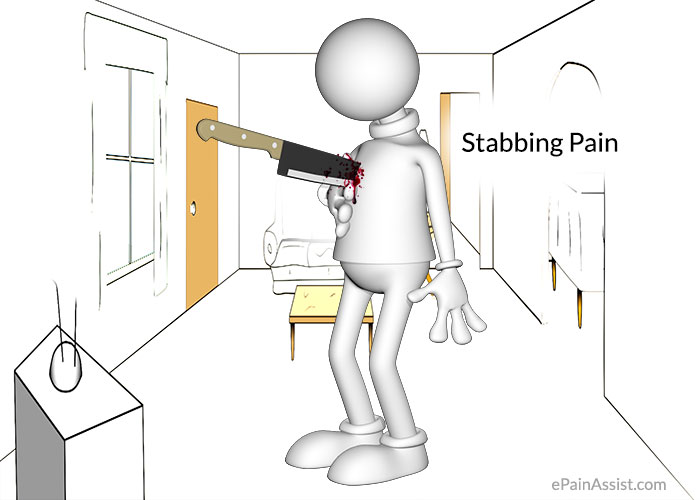 What Can Cause Stabbing Pain?