Lipomas are slow growing tumors of fatty tissue formed in between the skin and underlying muscle layer. It is a benign tumor that commonly forms in the subcutaneous tissues. The common sites where lipomas occur are head, neck, shoulders, back and abdomen. They can occur in any age group, but are more common among adults aged between 40 to 60 years. Lipomas can either occur in solitary (single) or in groups (clustered). 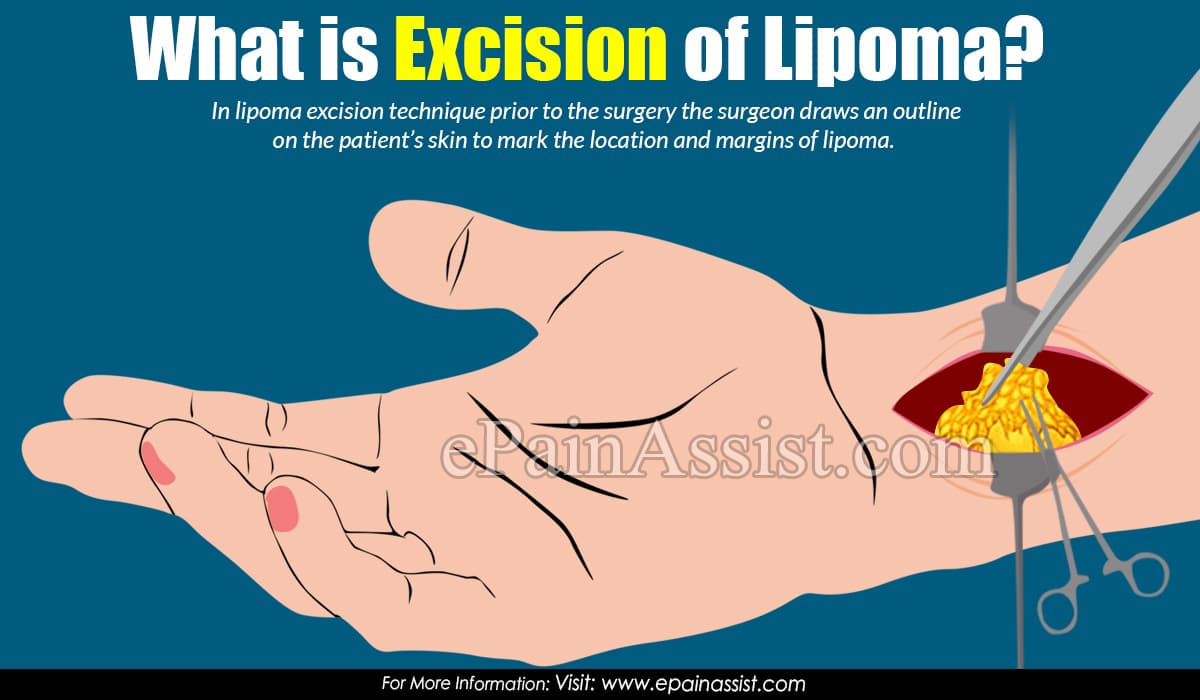 What is Excision of Lipoma?

Lipomas are usually small in size ranging from 2 to 5 centimeters. Sometimes they may also grow unusually bigger in size where they might become painful and cause problems they need to be excised. In excision lipoma the tumor is surgically removed by planned skin incisions under anesthesia.

In most cases lipomas do not need treatment; they can be left as it is. However, in cases where they are painful and rapidly growing in size they need to be removed through a procedure called as lipoma excision.

In lipoma excision technique prior to the surgery the surgeon draws an outline on the patient’s skin to mark the location and margins of lipoma. The affected skin is cleansed with an antiseptic solution (povidone iodine or chlorhexidine) and next anesthesia is administered to the patient.

In case of a small lipoma a 3 mm to 4 mm excision is made on the skin over the lipoma to place a curette inside the wound. With the use of curette the surgeon frees the lipoma from the surrounding tissue and then removes it through the cut. Since the incision is very small it does not need stitches and can be closed with a simple dressing.

If the lipoma is large, a larger incision is made on the skin. A hemostatic clamp is then placed over the wound and from the opening the surgeon will reach the tumor safeguarding the nerves and vessels and remove the fatty tissue. It is then followed by suturing of the incision.

The patient is then asked to return to the hospital after 7 days to get the wound checked. The sutures are removed once the healing starts.

Surgical excision of lipoma is preferred since the recurrence rate is low. The infected tissue is removed along with its margins.

However, the most common technique still used is the surgical excision of lipoma for its effectiveness but it can lead to scarring and abrasion of the skin. Lasers and other techniques are costly and are mostly used for deeper lipomas that may require a large incision.

Causes and Symptoms of Lipoma

The exact cause of lipoma is unclear but it is mostly seen to run in families. It is also more common in alcoholic men. They are mostly asymptomatic and do not cause any problems. Lipomas are small, painless, round mobile masses with a characteristic soft and doughy feel. The skin over the lump appears normal. A lipoma can be painful only when it presses over a nerve or a blood vessel is running over it.

It should be differentiated with liposarcomas that is a malignant tumor, which grows rapidly and is usually painful. It presents with the same symptoms as lipoma.

A diagnosis of lipoma is made on the basis of the patient’s history and physical examination. Examination of the lump is usually suggestive of lipoma. It should however, be differentiated from liposarcoma, which is a rapidly growing tumor. To confirm the diagnosis imaging techniques such as an X-ray, CT scan, and MRI can be performed. A biopsy of the tissue sample may be done in cases where the lipoma is unusually large.