Bile peritonitis is a type of inflammation of the peritoneum which is caused due to the escape of bile in to the free peritoneal cavity. Perforation of gall bladder, biliary trauma (thoracoabdominal trauma or Iatrogenic trauma), and extra-hepatic bile ducts or peptic ulcers’ spontaneous perforation may cause the leakage of bile in to the peritoneal cavity and generate the symptoms in Bile Peritonitis.

There are various conditions which may cause perforations in gallbladder (where the clear, yellow fluid produced by liver known as Bile is stored) or the common bile duct carrying the bile in to the small intestine whenever essential for digestion. Mostly such perforations are caused during per-cutaneous needle biopsy of the liver and also rarely erosion from biliary calculi may also cause the perforation leading to leakage of bile from the gall bladder or the common bile duct. There are serious conditions in Bile peritonitis where it may be fatal unless operation is carried out to repair bile peritonitis. 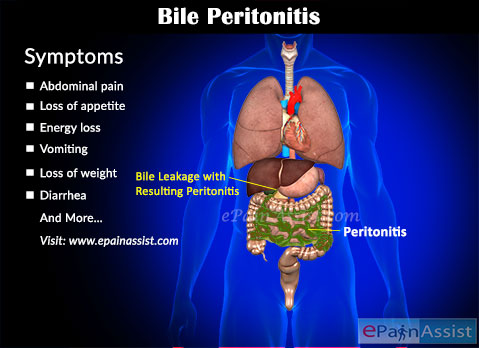 It is true that treatments for peritonitis depend on the source or underlying cause of the peritonitis. However in serious cases, an emergency laparotomy is usually performed where any damaged, ruptured or perforated organ is repaired.

Apart from this, Bile peritonitis is also treated by giving antibiotics through a needle in the veins along with the essential fluids so as to prevent dehydration. Antibiotics may also be directly infused in to the peritoneum. Cefoxitine, Cephalosporin, Ampicilin, Peperacilin etc are some of the antibiotics used.

Untreated bile peritonitis has a poor prognosis and often leads to the patients’ death. However, with treatment the prognosis may vary based on the symptoms, level and conditions in the individual suffering from the bile peritonitis.

Because the diseases peritonitis accompanies are usually not under the voluntary control of an individual. So, there is usually no way to prevent peritonitis. However, being a bit careful while performing open operations of bile ducts can help prevent the perforations in the bile ducts, which may lead to bile peritonitis or a leakage of bile in to the peritoneal cavity. Prompt treatments in severe cases of Bile peritonitis can help one prevent any complications.

With the onset of any symptom like abdominal pain, serious diarrhea, vomiting, fever, etc; it is essential to visit a doctor and undergo the appropriate diagnosis and follow up treatments as prescribed by the medical professional so as to get rid of any danger in Bile peritonitis.