Swelling, infection,heavy mucus generation or irritation of the sinuses’ lining for more than 12 weeks causes chronic rhinosinusitis or CRS. The drainage of the mucus can become stuckbecause of the swollen lining of the sinuses. 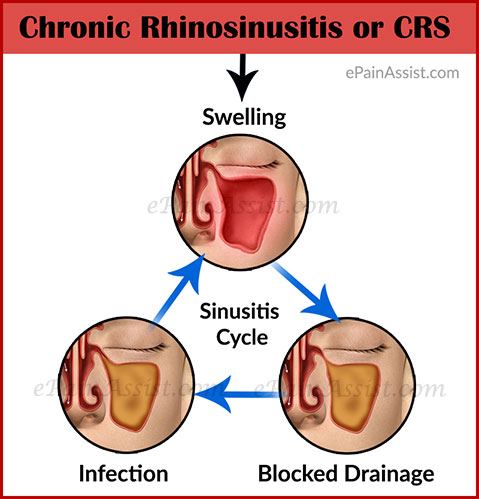 Other than lasting for at least 12 weeks, two out of the following symptoms are caused by chronic rhinosinusitis or CRS:

The approach for treating chronic rhinosinusitis or CRS is specific due to its persistence. The symptoms slowly progresses and more subtle and thus healthcare providers and patients sometimes overlook this situation.

The probability of having chronic rhinosinusitis or CRS can be high if you have had multiple symptoms stipulated above. Ask your doctor of the possibility other continuing with multiple antibiotics.

Deviated nasal septums, growths that are abnormal at nasal polyps (sinuses) are some of the causes of chronic rhinosinusitis or CRS in some patients. Children can also be affected despite the fact that middle aged adults and the young adults are the most affected.

Nasal Polyp and Chronic Rhinosinusitis or CRS: Growth that is abnormal in the nose of the patients with chronic rhinosinusitis or CRS is known as nasal polyps. The clogging of the sinuses by polyps can occur when they are numerous and grow abnormally large. The formation of the nasal polyps has not yet been discerned by scientists. The polyps can be treated through surgical removal and shrinking. Sometimes both procedures are needed in some patients.

Causes of Chronic Rhinosinusitis or CRS

The following are the major causes of chronic rhinosinusitis or CRS:

Signs and Symptoms of Chronic Rhinosinusitis or CRS 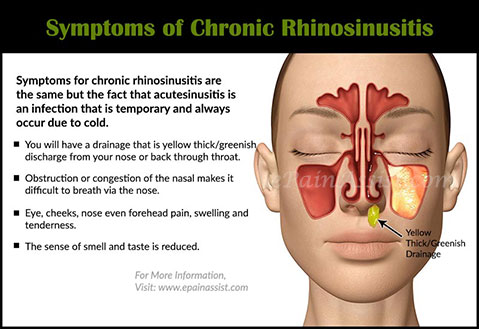 Other signs and symptoms of chronic rhinosinusitis or CRS include:

Increased risks of having recurrent and chronic rhinosinusitis or CRS increasing include:

Complications in Chronic Rhinosinusitis or CRS

Complications of chronic rhinosinusitis or CRS are:

Tenderness on your throat or nose should be detected by your doctor first to confirm cause of symptoms of chronic rhinosinusitis or CRS. In order to observe the inside of your nasal, he/she may:

Other abnormalities or nasal polyps are physical conditions that can be ruled out through visual inspection. Chronic rhinosinusitis or CRS can also be screened by your doctor through other viable methods:

Treatment for Chronic Rhinosinusitis or CRS

The aim or purpose of chronic rhinosinusitis or CRS treatment is to:

Treatments to Relieve the Symptoms of Chronic Rhinosinusitis or CRS

Chronic rhinosinusitis or CRS symptoms can be relieved when your doctor recommends. These include:

Studies are still underway on the effective mode of medication deliverance to the chronic rhinosinusitis or CRS.

Bacterial infections and sinuses might require antibiotics sometimes. Antibiotics do not apply since chronic rhinosinusitis or CRS is not caused by bacteria.

Immunotherapy for Chronic Rhinosinusitis or CRS

Reducing the allergic reaction of the body is recommended when allergy is the main contributing factor of chronic rhinosinusitis or CRS. Thus, the use allergic shots (immunotherapy) treat the condition.

The valid option if incase of resistance of CRS to medication or treatment is endoscopic sinus surgery. An endoscope is a thin tube that is flexible and light attached in order to explore the sinus passage. If the nasal blockage is caused by polyp, then the doctor can shave it away or remove the tissue. Drainage can also be promoted through enlargement.

Managing and relieving symptoms of chronic rhinosinusitis or CRS can be achieved through these self-help steps:

Honey as a Natural Treatment for Chronic Rhinosinusitis or CRS

Bacterias are easily killed byhoney in all dimensions more so to the drug resistance biofilms which is the reason for difficulty in treating chronic rhinosinusitis or CRS.
In a research study it was found out that biofilms-grown bacteria and planktonic homey proved to be more effective than antibiotics that were commonly used in eleven isolates out of three separate biofilms.

Important clinical implication might be held in such findings regarding the process of combating refractory chronic rhinosinusitis or CRS. This the common chronic infection in North America and people who are affected annually in the United States add up to 31 million.

Neti pot the most famous method of irrigation despite the fact that there are a couple of other methods (Aladdin’s magic lamp and a plastic or ceramic with the portrait of a cross between teaspoons that is small. Neti pot as a form of nasal drainage is still being known in the US despite being around for centuries. The origin of neti pot is yoga/ayurvedic treatment tradition.

In order to clear away the nasal cavity after sinus surgery, the surgeons of ear, nose or throat, may recommend that one undergoes neti pot irrigation method for chronic rhinosinusitis or CRS. Use of neti pot is now wide since those who have sinus symptoms from environmental irritants and allergies. Facial pain and pressure have been elevated through the use of neti pot and other devices because of the drainage enhancement mechanism. When used with the standard treatment of sinus, nasal irrigation helps in relieving sinus symptoms, according to research. Some speculate that nasal irrigation is enough to relive sinus symptoms without requiring medication.

The mucus is thinned and flashed out with the use of Neti Pot. That is the basic explanation.

Biologically approaching Neti Pot usage for chronic rhinosinusitis or CRS, it can be elaborate that how it works is that the tiny hair-like structures, known as cilia lining the sinus and nasal cavities. The cilia waves back and forth and in the process pushes mucus to the throat where you can swallow or at the front where you can blow easily. Coordination and the speed can be enhanced through the use of saline solution because movement will be more effective and thus allergens and irritants causing sinus problem will be removed.

Chronic Rhinosinusitis or CRS can be treated using several approaches that are non medicinal and people can use. Mineral and vitamin support should be basic that should be emphasized and ensured. Vitamins should be A, C and E while minerals include Zinc and Selenium. Overall health can be enhanced through these supplements and thus normal people can also use.

Impairment of the cell membrane can result due to radicals and these vitamins (antioxidants) helps cells to avoid such damage. The body does not produce sufficient antioxidants to rid the free radicals. Supplements are required in this consideration.

People tend to over eat minerals and vitamins. Continuous use will result in damage to our system. Diarrhea can result owing to too much intake of vitamin C. Gastrointestinal track is recommended to be cleaned despite the fact diarrhea can throw electrolyte levels to go array.

Nutritional health food is available in big town but below is mineral and vitamin supplements that you can get from your pharmacist or local grocery store. Benefits of Ai Chi in Pregnancy

Tai Chi that is practiced in water is named as Ai Chi. Tai Chi is a form of martial art involving slow, systematic, low-impact... What is Gardner Syndrome? Gardner syndrome is an extremely rare genetic pathological condition which is characterized by development of benign growths usually in the colon...

How to Do Yoga Mudrasana or the Psychic Union Pose and its Benefits and...

What Are The Non Motor Symptoms Of Parkinson’s Disease?

What Are The Non Motor Symptoms Of Parkinson's Disease? The fundamental symptoms of the Parkinson's disease have to be obviously movement related & loss of...