What Causes Raccoon Eyes & What Are Its Treatment Options?

What Are Raccoon Eyes?

Raccoon Eyes which is also known by the name of Raccoon Sign is the name given to large dark rings that form around the eyes. This can be due to various conditions which have been mentioned in detail below. All the conditions result in pooling of blood around the eyes causing it to form a ring which has stark similarity to the eyes of a Raccoon. It should be noted here that Raccoon Eyes cannot be caused by not sleeping well or use of certain cosmetics in and around the eyes and is always a result of a medical condition or injury.[1,2]

Raccoon Eyes can be defined medically as a combination of progressive proptosis, periorbital ecchymosis, and edema that can be unilateral or bilateral. Fracture of the anterior cranial fossa is believed to be the most common cause of Raccoon Eyes. The fracture may not be evident immediately on radiographs like x-ray and even a CT scan. It normally takes somewhere around 2 to 3 days post injury for the Raccoon Eyes to develop. [1,2] 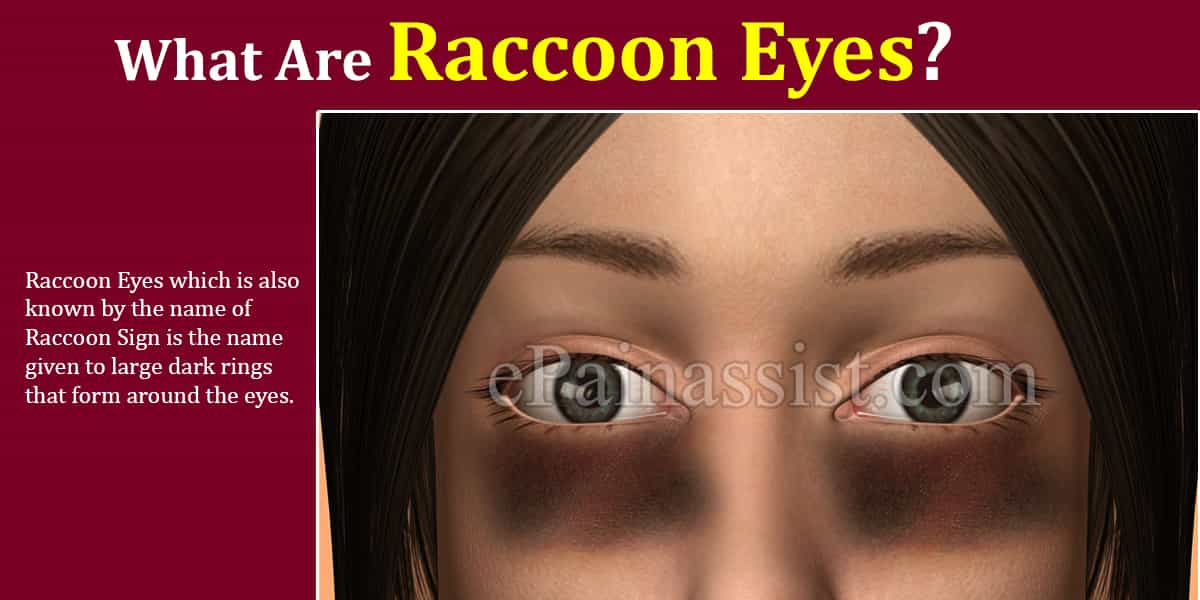 As stated, trauma and injury is the primary cause of Raccoon Eyes even though there are other medical conditions that can also cause it but these are few and far between. The causes for Raccoon Eyes include.[2]

Basal Skull Fracture: This is the cause of Raccoon Eyes in almost 60% of cases. A basal skull fracture is said to have occurred when there is a break in the bones forming the skull base. This includes the temporal, occipital, sphenoid, and ethmoid bones. This happens normally as a result of high speed collisions, sporting injuries, or falling from a height.[2]

These fractures cannot ben visualized clearly on x-rays and are most of the time missed. It may take at least two to three days for Raccoon Eyes to develop in cases of basal skull fracture.[2]

Facial Fractures: A fracture to the bones surrounding the eyes can also be one of the causes of Raccoon Eyes. Additionally, fracture of the cheekbone, nose, or the eye socket also causes Raccoon Eyes.[2]

Amyloidosis: This is a medical condition characterized by elevated levels of amyloid in the organs of the body. When this occurs in the capillaries then it becomes weak and ruptures. This is what may result in Raccoon Eyes with events such as coughing or sneezing. The symptoms of amyloidosis are quite variable and differ from individual to individual depending on the organ affected by it.[2]

Rhinoplasty: This is also one of the common causes of Raccoon Eyes. This is a procedure where the surgeon reconstructs the cartilage and bones of the nose to give it a better shape. If the surgery is extensive, then it is quite possible for the person to develop Raccoon Eyes after the procedure.[2]

Other Causes: Some of the rare causes of Raccoon Eyes include allergies, leukemia, orbital myositis, thrombocytopenia, sinusitis, and certain cosmetic surgeries.[2]

What Are The Treatment Options For Raccoon Eyes?

Raccoon Eyes is not a condition but is rather a symptom or an after effect of a condition or procedure. Thus Raccoon Eyes itself does not require treatment instead the focus is on treating the cause of it. Once the underlying cause is treated then Raccoon Eyes goes away on its own. For basal skull fracture surgery may be needed to fix it, especially if there is a rupture of meninges.[2]

Surgery may also be required for facial fractures to repair the damage and prevent any further worsening. Medical treatment is given for people with a diagnosis of neuroblastoma. For people with amyloidosis treatment is aimed at reducing the levels of amyloid in the blood. If Raccoon Eyes is accompanied by any facial deformity then physicians will look at correcting that as well along with treatment.[2]

In conclusion, Raccoon Eyes is the sign of an underlying medical condition, especially fracture of the area around the eyes. Basal skull fracture or facial fracture is the primary cause of Raccoon Eyes. The condition resolves once the fracture heals. The recovery time for Raccoon Eyes depends on the extent of injury and whether there are any complications arising from the fracture.[1,2]

It should be noted that head injuries are serious and at times can even be fatal. Thus it is imperative for anyone with a head injury along with Raccoon Eyes to go to the nearest emergency room for a thorough checkup for proper diagnosis and treatment. Early detection is the key for a good prognosis and early recovery as a result of injuries or conditions causing Raccoon Eyes.[1,2]