What Can Cause Pimple on Penis?

Pimples are something which an individual can get anywhere in his or her body. Pimples are small fluid filled pustules that usually are caused as a result of an infection or inflammation of the hair follicles.

Pimples tend to come up anywhere in the body and there are numerous lotions and creams available in the market to treat those. Sometimes, pimples appear in areas of the body which is for the most part not exposed to the environment like breasts in females and penis in males.

A Pimple on Penis may not be just a common infection but may signal the onset of something far more serious such as a sexually transmitted disease if the individual has indulged in unprotected sex. 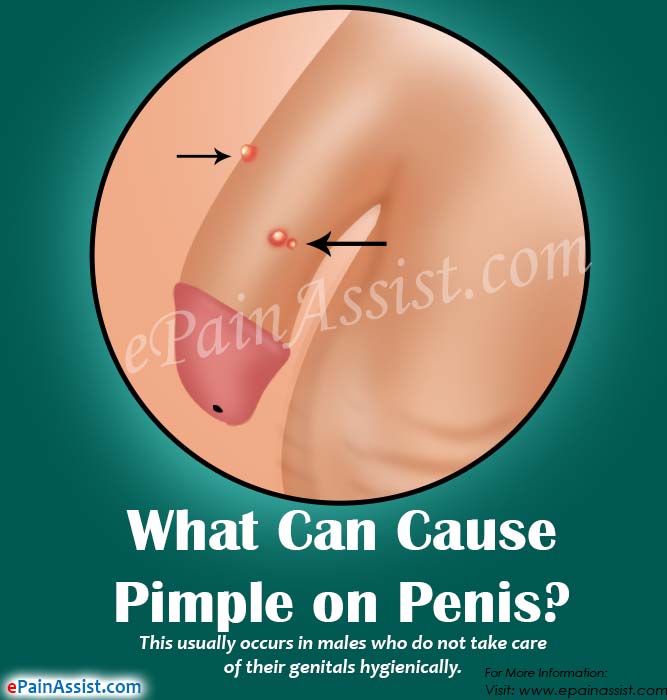 What Can Cause Pimple on Penis?

Some of the common causes of Pimple on Penis are:

Bacterial Infection: This usually occurs in males who do not take care of their genitals hygienically. They may not wash the area with soap and water while bathing daily. Since this area remains covered for most part of the day with tight inner garments the sweat coming out from the genital area creates a breeding ground for bacterial infections especially if the inner garments are not washed and the area itself is not maintained hygienically. This result in development of Pimple on Penis which may be a solitary pimple or there may be multiple pimples clustered around the penile area.

Folliculitis: This is yet another common cause for Pimple on Penis. This condition is caused when the hair follicles get infected creating an area of inflammation around the penis which leads to the development of Pimple in the Penis.

Hirsutoid Papillomas: This is yet another cause for Pimple on Penis. Actually, Hirsutoid Papilloma is not a disease condition but is just an anatomical variation where there is a growth of small bump or pimple like structure on the head of the penis immediately above the shaft.

Since it is a normal anatomic variant it is completely benign, harmless, and causes no problem to the structure and function of the penis. Some people may confuse it with STD but this is not the case and it is just a normal growth which goes away on its own with time.

Razor Burns: This is also one of the causes of Pimple on Penis. While shaving it often happens that we irritate the skin which then gets inflamed and results in the development of Pimple on Penis. These types of pimples usually develop after shaving the genital area.

Staphylococcus Infections: Staphylococcus is a bacterium which is present in the body of about 30% of people. While staph infections in other areas of the body are quite a common occurrence such infections occurring in the genital area is extremely rare.

Staph infections is usually caused by cuts or abrasions that occur normally during shaving of the genital area through which the bacteria infiltrates the body resulting in the formation of Pimple on Penis.

Staph infections are extremely contagious and the affected individual should be treated with appropriate antibiotics to prevent spread of the infection causing some potentially serious health problems.

What are the Do’s and Don’ts for Pimple On Penis?

Whatever may be the cause of Pimple on Penis but there is one thing that one should not do is to squeeze or pop the pimple as this may result in spreading of infection and the condition may get worse.

The best that an individual can do apart from applying the lotions and creams as prescribed by his physician is to keep the area as clean and dry as possible.

Patient should avoid using any form of cleansers or scrub the area as it may cause irritation and may make the infection worse. A visit to a physician is recommended if there is no resolution in symptoms and there is no fading or complete resolution of the Pimple on Penis.