What Is The Difference Between MS ALS And Myasthenia Gravis?

Myasthenia gravis and MS ALS both affect the muscles that participate in the movement of body parts. Both diseases are neuromuscular conditions that impair the quality of life. Both the disorders are an autoimmune condition in which overactive immune system attacks the healthy nerve tissues that are involved in the function of the muscles. Both the diseases are not curable and cannot be prevented. Both the diseases have a lot of similarities but they are still different diseases in many ways. 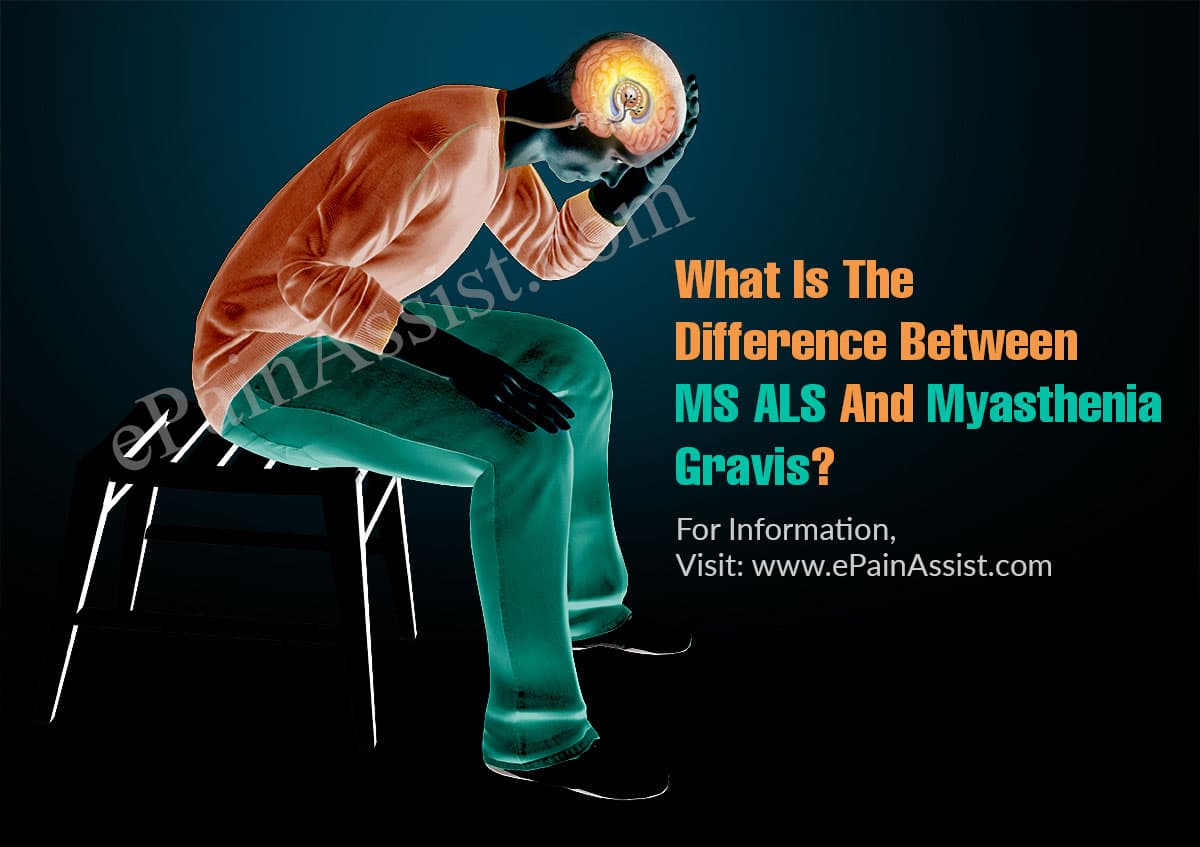 What Is The Difference Between MS ALS And Myasthenia Gravis?

Myasthenia gravis and MS ALS are two different neuromuscular disorders that affect the muscles that participate in moving different parts of the body. Myasthenia gravis affects the communication between nerve endings and muscles whereas MS ALS affects the communication of nerve and muscles due to degeneration of myelin sheath. Other differences between them are discussed here. (1) (2)

Myasthenia gravis is a neuromuscular disorder characterized by the weakening and tiring of muscles that control the motor functions of the body. It happens due to lack of proper communication between nerves and muscles. It appears suddenly and rarely causes life-threatening complications.

MS ALS refers to multiple sclerosis amyotrophic lateral sclerosis. It is also known as Lou Gehrig’s disease. It is a neuromuscular disease characterized by degeneration of upper and lower motor neurons that control voluntary muscles of the body. It is a rapidly progressive disease that can be fatal.

MS is caused by demyelination of the nerve fibers done antibodies produced by the overactive immune system. Due to exposed nerve fibers, the information does not flow properly from nerve fibers to the muscles resulting in spasms in them. MS ALS tends to run in families.

Myasthenia gravis represents itself by symptoms such as difficulty in swallowing, drooping of eyelids, double vision, speech deterioration, difficulties in holding the neck, and moving arms, hands, legs, and feet. This disorder affects eye muscles first and then cause generalized affections of muscles in a course of time.

MS ALS is represented by symptoms like the twitching of muscles, shortness of breath, trouble in speaking loud, and weakness in the muscles of hands, arms, and legs. It starts with affections of hands and feet that progress to arms and legs. In later stages, the disease progresses aggressively to involve respiratory muscles that may cause life-threatening consequences.

Myasthenia gravis is detected by blood tests that find out the antibodies produced against the acetylcholine receptors. Other tests performed are the measurement of muscle–nerve interaction and test were done after the use of acetylcholine enhancer.

MS ALS cannot be detected by any blood test. It needs a series of tests to confirm the diagnosis that involves a neurological examination, serum fluid analysis, detailed medical history, and MRI scan of the brain and spinal cord.

The symptoms of Myasthenia gravis can be controlled by a group of medicines that include ACE inhibitors, corticosteroids, and immunosuppressants. Surgical removal of the thymus gland is performed in case tumors of thymus cause the disorder.

MS ALS is managed with certain medicines that relieve pain and stiffness of the muscles. Physical and occupational therapies are suggested to reduce the symptoms. Feeding tubes and respiratory support devices are necessary for the late stages of the disorder until death.

Myasthenia gravis is more likely to cause thyroid problems and other autoimmune disorders. It may cause a life-threatening emergency when breathing muscles are involved. It is called Myasthenic crisis.

MS ALS is a rapidly progressive disorder that may cause respiratory failure. Its prognosis is very bad. It causes death in 3 to 5 years of the appearance of its symptoms. Only 10% of patients may live for 10 or more years. (1) (2)