If you have been planning for a baby, noting light bleeding can be an indication of pregnancy. It is medically known as implantation bleeding and occurs few days after conception. Some may feel it is regular periods, but if it is light, the chances of being pregnant are high. Know about implantation bleeding, the causes and what to expect during this phase.

You need not get worried about implantation bleeding as it is just an indication of early pregnancy. In fact, heavy bleeding is matter of great concern, as it can be really dangerous. It may be necessary to consult an expert doctor, if heavy bleeding is accompanied with several other problems like severe pain, cramps, cold, fever, gastric disturbances, etc. 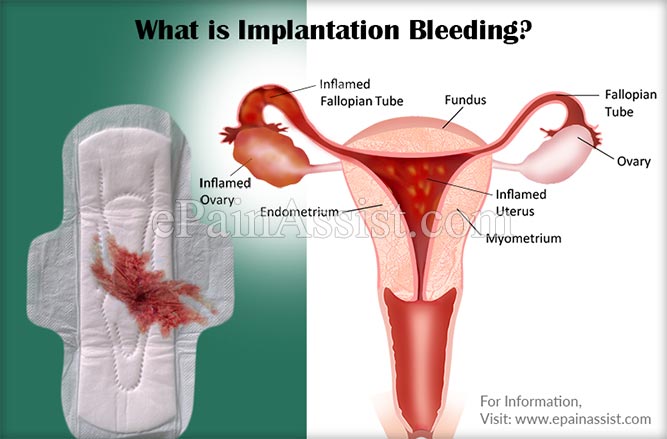 What is Implantation Bleeding?

Implantation bleeding occurs at the very initial phases of pregnancy. When the female egg is successfully fertilized by the male’s sperm, an embryo is formed, which multiplies to grow further. Along with that, the inner lining of the uterus, termed as endometrium starts changing. As a part of the menstrual cycle, the endometrium continues to thicken after ovulation, to be prepared for the embryo to get implanted.

After the fertilization process is complete, the embryo moves to the uterus, through the fallopian tube. At this stage, the embryo needs more nourishment, as it is in a growing phase. Endometrium which had been preparing for the embryo is solely responsible for providing the most essential nutrients to the embryo. This is the main reason why the embryo gets attached to the endometrium in the uterus and continues to grow into a fetus. The process of the embryo getting embedded into the endometrium is called implantation. It receives nutrition and blood supply in this area and continues to grow.

During this phase, as the embryo pushes itself into the endometrium, some minute blood vessels on the inner lining of the uterus, get ruptured. This is the main reason for slight bleeding during this phase, which is called implantation bleeding. The color of blood which is discharged, can vary from pink to dark brown. After the completion of fertilization, implantation bleeding occurs in five to ten days, depending upon the overall health of the lady.

While this is a normal process, some of the causes of implantation bleeding can be as below.

After the formation of embryo, it transfers to the lining of the uterus, so that it can implant itself. It might happen that the implantation process can hit the uterus lining a little harsher, which can cause slight bleeding.

Certain factors like the mother’s health, lifestyle and existing medical conditions can sometimes influence the implantation process. Hence, every woman may experience this phase in a slightly different manner. Implantation bleeding is extremely normal and does not have any side-effect on the development of baby.

When to See a Doctor?

While there is no need for treatment of implantation bleeding, keeping a close watch is suggested. It usually stops automatically after few days. But if the bleeding takes place in excess, you must immediately consult a doctor. Note the amount and color of the discharge to provide proper information to the doctor.

Another important reason which can cause vaginal bleeding is ectopic pregnancy, in which the embryo is developed outside the uterus. Bleeding along with high intensity cramps are very common in this condition, which can also result into a serious problem, if not taken immediate action.

Sudden bleeding can also be a cause of miscarriage. Around 15% females undergo a miscarriage in the first few months of their pregnancy. Cramps and bleeding are known to be very common in such condition, in which case, should immediately consult a professional doctor.

As implantation bleeding is basically a sign to check whether a woman is pregnant or not, one can easily get confused with normal periods and implantation bleeding. Till now there is no exact test available, which can clearly distinguish the difference, which is why one can only wait for some more days and get sure of the condition. After waiting for some more days, you can easily undergo a pregnancy test and become sure of the actual reason behind bleeding.

So, if a lady experiences very light bleeding during her early pregnancy, there she doesn’t need to worry at all, as it is only a part of implantation bleeding. If the bleeding doesn’t stop, then it is important to seek medical attention.