Coccidia or Coccidiasina is a spore forming, microscopic, single celled parasites. They are members of the class Sporozoa and belong to the apicomplexan class Conoidasida. Coccidia are the largest group of apicomplexan protozoa. These are obligate intracellular parasites and need a host cell to reproduce. They usually reproduce within an animal cell and infect the gastrointestinal tract of animals and even humans. The intestinal infection caused by Coccidia is known as coccidiosis. 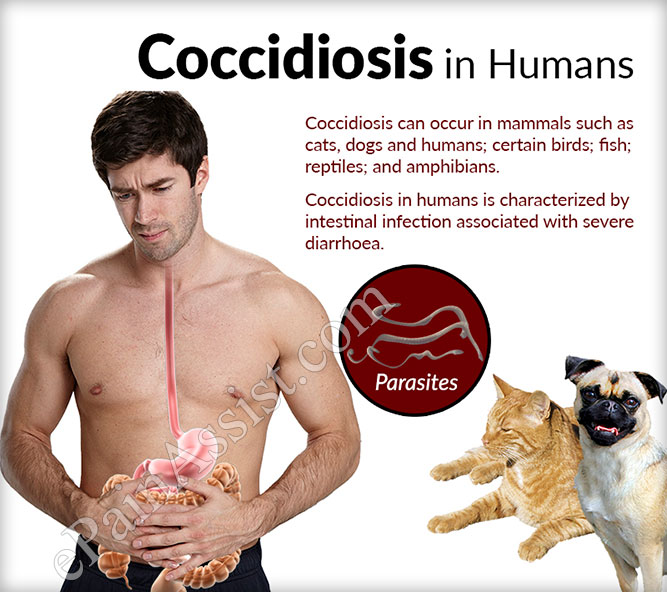 Overview of Coccidiosis in Humans

Among the above, Cryptosporidium, Toxoplasma and Isopora are the most common causative parasites. Isopora is a genus of the sporozoan subclass Coccidia. Isopora belli is a species of Isopora that infect the humans. It was first recorded by Dr. H. M Woodcock in 1915 while studied the faeces samples of World War I soldiers. This parasite is also responsible for a condition popularly known as “traveller’s diarrhea”. Humans are, usually also affected by the species Isopora hominis. These species are found in the intestinal tracts and are endemic in areas of Asia, Europe, Africa, southern Europe, Latin America and Oceania.

Coccidiosis is more common in immunocompromised patients (such as renal transplant patients and AIDS patients) and also in malnourished children. Coccidiosis is a contagious disease and it affects the human being upon exposure to faeces of an infected animal, or upon ingestion of contaminated food and water.

Causes and Risk Factors of Coccidiosis in Humans

The most common cause of coccidiosis in humans is as follows:

Symptoms of Coccidiosis in Humans

Epidemiology of Coccidiosis in Humans

Coccidiosis is endemic in areas of Asia, Europe, Africa, southern Europe, Latin America and Oceania. Being an infectious disease, there is no sex predilection and it affects both male and female equally. Coccidiosis can affect humans at any age; however, the severity is worse when it affects infants due to reduced immunity.

Pathophysiology of Coccidiosis in Humans

Coccidiosis in humans presents itself as mild intestinal symptoms in normal individuals; however, in infants and immunocompromised patients the symptoms are severe. This condition may be associated with eosinophilia. The most common mode of transmission of I. belli is through oral-faecal contamination predominantly in poor sanitary and unhygienic conditions. There is usually an incubation period of 3 to 14 days between ingestion of the infected material and onset of symptoms. Once the infectious oocysts are ingested, they invade the small intestine and destroy the epithelial cells there.

The life cycle of Isopora belli consists of 2 cycles, i.e. asexual cycle (schizongony) and sexual cycle (gametogony). Both these cycles occurs in the epithelium cell of humans. The infection occurs as mature oocysts and sporozoites enter the human digestive tract after ingesting contaminated food items. The oocystic and sporocystic wall will rupture due to the action of the digestive enzymes in the intestine. This leads to release of sporozoites which enter the epithelium lining of the small intestine and grow into trophozoites. The cytoplasm and the nucleus divide into a large number of merozoites through the asexual cycle. After about 2 cycles, some of the merozoites enter the epithelium cells to form microgametocytes and macrogametocytes through the sexual cycle. One male gamete fertilizes one female gamete and a zygote is formed with a wall around it to form immature oocyst. These immature oocyst passes out of the body through the faeces to become mature oocyst. This in turn infects another man and the lifecycle is complete.

Diagnosis of Coccidiosis in Humans

Diagnosis of coccidiosis in humans is generally done by an experienced physician or a gastroenterologist. A thorough case history is obtained including recent history of travel, exposure to animals and ingestion of unusual and contaminated item. A physical examination is done to rule out other possible causes of abdominal discomfort. Stool culture is done as a confirmatory study. Demonstration of large typically shaped oocysts in stool samples on microscopic examination forms the basis of diagnosis of this condition. Repeated stool cultures are recommended as the oocysts are passed in small amounts and intermittently. If the stool examination appears negative, biopsy of the duodenal specimen is advised. A string test or an Enterotest may also be recommended. The oocysts are usually visualized on a wet mount by microscope with bright field, DIC (differential interference contrast and epifluorescence. Alternately the stain may be modified by acid fast staining.

The oocysts are in immature phase when detected in fresh stool. They are usually elongated, ovoid and flask shaped. It has an outer membrane and an inner membrane. They are hyaline, colourless, and transparent and at the tip of the narrow end there is a micropyle. There is a sporoblast or a zygote within the nucleus of the oocyst. The oocysts mature within 2 to 3 days or when 2.5% potassium dichromate solution is introduced. The mature oocyst has 2 sporocysts which are spherical in shape with four crescent (banana shaped) sporozoites. This is the infective stage of the parasite.

Treatment of Coccidiosis in Humans

Coccidiosis in humans is treated with oral medications such as antibiotics like trimethoprim-sulfamethoxazole (TMP-SMZ). It is also used as prophylactic medication in AIDS patients to prevent infections such as Pneumocystis carinii. The patient is advised to stay well hydrated and drink adequate amount of fluids to overcome dehydration.

Prognosis of Coccidiosis in Humans

The symptoms of coccidiosis in humans usually improve within a few days to few weeks. However, in immunocompromised patients, the symptoms are more severe and healing takes more time.

Coccidiosis is an infectious condition that commonly affects cats, dogs and other animals on exposure to a protozoal parasite known as coccidia. It can also affect humans and it is characterized by gastrointestinal irritation with severe diarrhea. In normal individuals, the conditions resolve within a few days without any complications. However, when it affects immunocompromised patients and infants, it can lead to further complications. The infection spreads through direct contact and arises due to poor sanitary condition primarily due to ingestion of contaminated food and water. Being an infectious disease, it is advised to follow good hygiene practices to avoid occurrence of coccidiosis in humans.