Clubfoot means a variety of congenital abnormalities of the foot in which the baby’s foot is out of its normal position or is twisted. In this condition, the tendons in the body are shorter than normal. Clubfoot is quite a common birth defect in babies. This disease can range from being mild to pretty severe. Majority of newborns have clubfeet bilaterally. Clubfoot significantly affects ambulation of the child, so physicians recommend this condition to be treated before the child begins to walk. Majority of cases of Clubfoot is treated successfully although in some cases children may need a surgery later on in their life. 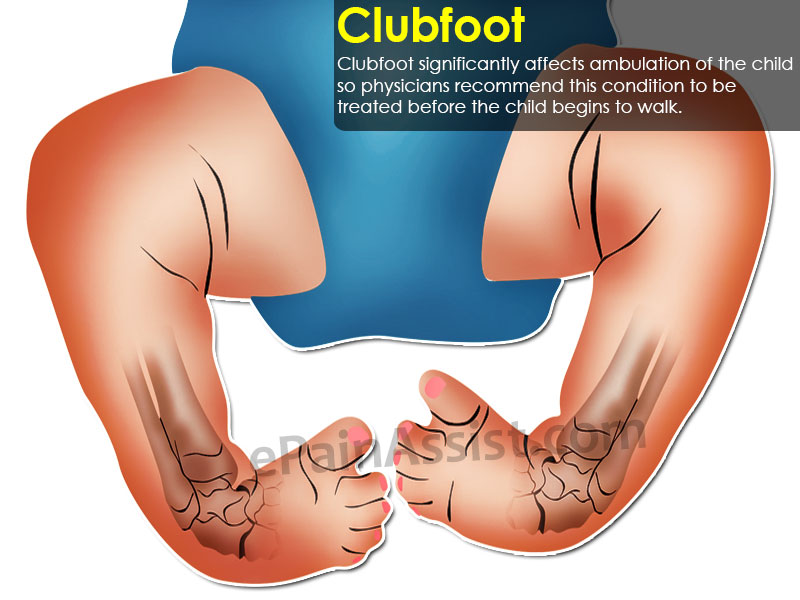 What Are The Causes Of Clubfoot?

The root cause of clubfoot is still not known but it is not believed to be caused by the position of the fetus in the mother’s body. In some instances, clubfoot tends to be caused due to some congenital musculoskeletal abnormalities like spina bifida. Researchers have also opined that if a female smokes during pregnancy then it may lead to clubfoot in the child, especially in people with a family history of this disease.

What Are The Symptoms Of Clubfoot?

Symptoms Of Clubfoot Include:

How Is Clubfoot Diagnosed?

Usually the treating physician will recognize Clubfoot immediately after the child’s birth by just simple observation of the foot. The physician may order x-rays of the affected foot to look at the extent of the condition. Clubfoot can also be visualized before the child is even born via ultrasound of the fetus where a Clubfoot is clearly visible.

What Are Treatments For Clubfoot?

It is recommended that Clubfoot be treated as soon after birth as possible as the bones of the newborn are extremely flexible and hence treatment usually starts by the time the infant is into the second week of life. The main aim of treatment is to improve the appearance of the foot and to make it as normal as possible before the child begins to ambulate. Some of the treatment measures for treating Clubfoot are:

Stretching and Casting: This form of treatment is also called as the Ponseti method and is the most preferred treatment for Clubfoot. In this form of treatment, the physician will move the foot in a normal position and then immobilize it in a cast to maintain it in that position. This method is repeated once to twice a week for a few months. After this, the physician will perform a small procedure to increase the length of the Achilles tendon. Once the shape of the foot is normalized, the parents are expected to maintain that position by performing regular stretching exercise of the baby’s foot, use specialized braces and making sure that the baby wears it as long as it is required which may be up to two to three years. This method of treating Clubfoot will only be successful if the parents are actively involved with exercising the baby and regular use of the brace.

Stretching and Taping: This is one more method of treating Clubfoot. It is also called as the French Method of treating Clubfoot. In this method, the foot is moved to a normal position on a daily basis and taped. A machine is used to move the foot when the baby is asleep. This method is done for up to six months and is then followed by stretching exercises and use of night splints until the baby starts ambulating

Surgery for Club Foot: This method of treatment is required if the above two methods fail and the child does not respond favorably. In this method, the surgeon will increase the length of the tendons and then slowly get the position of the foot back to normal. Postsurgery, casting will be required for up to two months which is then followed by brace wear for up to a year.