What Is Knee Popping?

Every once in a while whenever we bend to pick up something or are hiking we tend to hear a popping sound coming from the knee. This is called as Knee Popping. In medical terms it is called as crepitus of the knee.1 This Knee Popping may be caused due to numerous factors. Knee Popping can be categorized into three types:

Painless Knee Popping: This is a condition which one sees every now and then where the knee pops, but there is no pain accompanied with it. It is a benign condition and you do not have to worry about anything and no treatment is required for it.

Knee Popping Due To Injury: There are times when the knee gets injured due to some sort of impact while playing sports or during a slip and fall accident.2 During such cases, the knee popping is accompanied by pain due to it getting twisted in aberrant way which can damage the knee.

Knee Popping Without Injury: There are times when the knee starts to pop without any known source of injury to the knee and there is no particular cause for the knees to pop. These episodes can be caused due to certain medical condition like arthritis and the like.

What Can Cause The Knees To Pop?

Gas Bubbles as a Cause For Knee Popping: The most common cause of Knee Popping which is not accompanied by any pain is due to bubbles of gas which tend to build up inside the joint and then burst. It can also be caused due to ligaments or tendons which snap above the joint. Here it is important to understand how gas bubbles are actually formed inside the joint. The gas bubbles are usually formed due to changes in pressure in the knee joint due to normal everyday use. When these bubbles burst or break then it causes the one to pop. In medical terms this phenomenon is called as cavitation. This is very normal for an individual and does not pose any threat to the joint. Likewise, with normal motion of the joints, a tendon or a ligament may stretch more than normal slightly and may snap producing a popping sound. This also does not pose any threat to the joint itself and is a common condition.

Medical Conditions That May Cause The Knees To Pop

In cases of a ligament injury, the affected individual will hear a loud popping sound from the knee. There will be severe pain in the knee following the injury. The most common ligaments that get injured in the knee that cause Knee Popping are the Anterior Cruciate Ligament and Medial Collateral Ligament in the knee. These ligaments normally tend to get injured after a blow or trauma to the knee usually during sporting activities like after a tackle in soccer or abrupt twisting of the knee like when dribbling a football. Some of the other symptoms associated with ligament injuries are swelling and pain immediately following the injury along with instability of the knee.

At times an individual can experience Knee Popping without any known traumatic cause. There are certain medical conditions which tend to cause this popping of knees. These conditions are:

Knee Popping Due To Meniscal Tears: There are times when the ligaments and the meniscus in the knee tend to get stretched beyond their limits either due to sporting activity or due to an injury like a slip and fall which results in tearing of the ligament or meniscus. This condition causes Knee Popping and severe pain in the knee. 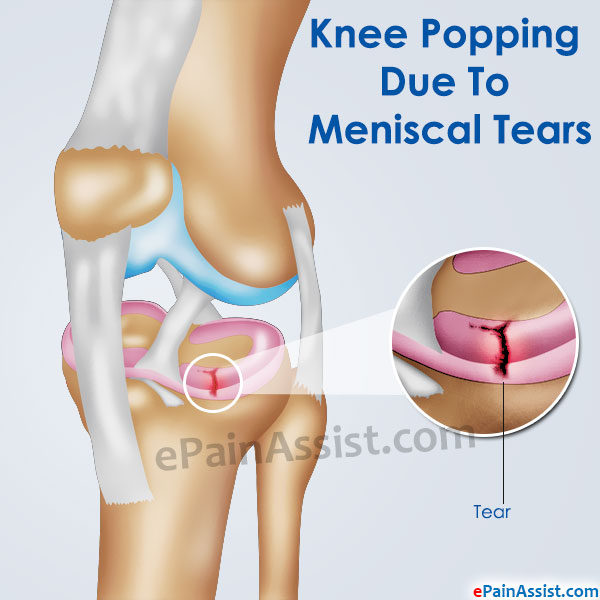 Knee Popping Caused Due To Arthritis: This is a medical condition which is caused due to general wear and tear of the joints. Due to aging the joints along with the ligaments and tendons become weak and even slight overstretching of the joints may cause the knees to pop and swell. Knee Popping due to arthritis is usually found in people who are above the age of 50.

Popping of the Knee Caused Due To Chondromalacia Patella: This is a medical condition which is caused due to increased friction between the kneecap and the femur resulting in pain and popping of the knee. This condition usually affects sportsmen who are involved in sports like football, rugby, or tennis and is usually found to affect females more. The knees tend to pop in this case whenever it is bent or straightened.

Runners Knee as a Cause For Knee Popping: This is a term given to a condition in which there is constant friction between the patella and the femur resulting in the popping sound. This is usually found in long distance runners and normally affects office workers mostly when they sit for a long period of time and then begin to walk. Knee Popping due to this condition is intermittent and waxes and wanes. Knee Popping is a common condition and does not pose any threat to the knee and there is no need for any treatment for Knee Popping alone, although the condition causing the knee popping like an injury or a tear of the ligament and conditions like arthritis or chondromalacia patella needs treatment for which you need to consult with your treating physician. Citing an example if arthritis is causing Knee Popping then the physician will prescribe medications for pain relief like antiinflammatories. The physician may also recommend application of ice alternating with heat for 15 to 20 minutes two to three times a day. A knee brace may also be recommended for immobilization and allowing the inflammation or injury to heal. The physician may also recommend you to a physical therapist to formulate an exercise regimen to increase the strength and stability of the knees and promote range of motion.

Glucosamine along with chondroitin is a known effective treatment for arthritis. Apart from this using fish oil and omega 3 fatty acids have also shown to be effective in treating arthritis.

Apart from medications there are also certain natural remedies in the form of herbal teas which are useful for treating arthritis causing Knee Popping and pain.

It is important to make note of activities that causes knee popping and to avoid them.

Exercise regularly and properly to strengthen the knee joint and its muscles so that your knees don’t pop. There are good stretching and strengthening exercises for the knees but it is important to consult your physical therapist who can assign suitable workout regimen for you depending on the cause of knee popping.