What Side is Appendix on & What Causes it to Burst?

What is an Appendix? 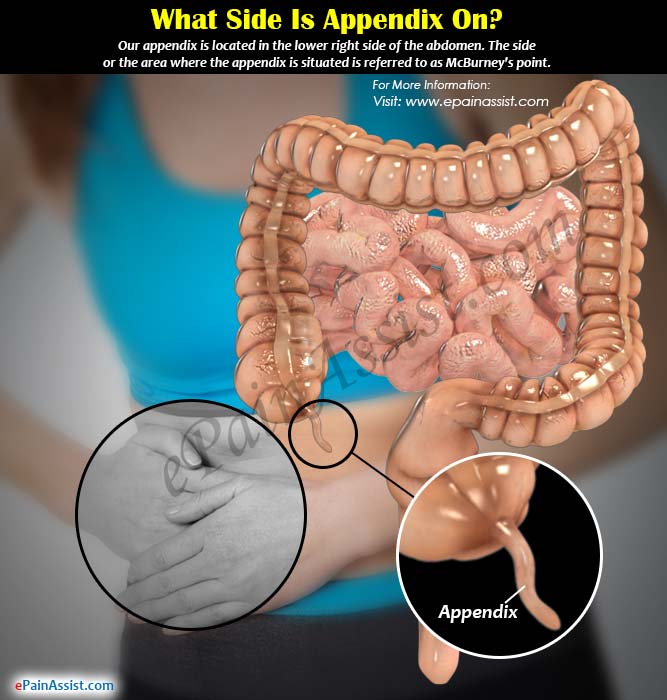 What Side is Appendix on?

Our appendix is located in the lower right side of the abdomen. The side or the area where the appendix is situated is referred to as McBurney’s point. If there is any tenderness or pain felt upon pressure on McBurney’s point, then it is a sign of appendicitis.

What is the Function of Appendix?

The exact function of the appendix is not clear. Previously it was thought that appendix was a vestigial organ and has lost its original function over the centuries of evolution. Furthermore, removal of appendix does not apparently produce any negative consequences on a person’s health. However, recent studies have shown that appendix is not completely useless and indirectly helps with the digestion and helps the intestines in recovering from a gastrointestinal problem.

There is a large amount of tissue present in the appendix which is associated with our lymphatic system. This tissue produces and transfers the white blood cells for fighting infections. This lymphatic tissue helps with the growth of the beneficial gut bacteria, which then helps with our immunity and digestion. Our gut lining contains a biofilm, which is a thin layer of mucus, microbes and this biofilm seems to be present in abundance in the appendix. After the immune system has helped our body in ridding of the infection, then these beneficial gut bacteria come out from the biofilm of the appendix and help with the recolonization of the gut.

What are the Appendix Related Problems?

Human beings can suffer from many problems which involve the appendix and one of which is appendicitis. Appendicitis is a medical condition where there is infection and inflammation of appendix. Appendicitis commonly occurs when an infection in the abdomen has spread to appendix or if there has been some kind of blockage or obstruction of the appendix. Some of the things which can cause blockage of the appendix include: parasites or intestinal worms, hard pieces of stool, ingested objects, such as pins and air gun pellets, GI tract ulcers, abdominal trauma and enlarged lymphatic tissue of the appendix. This obstruction causes infection where the bacteria start multiplying and cause pus to accumulate in appendix resulting in swelling of the appendix. Patient experiences symptoms like acute pain in the abdomen along with other GI problems such as vomiting and diarrhea. Patient feels sharp pain in the location of the appendix, i.e. the lower right abdomen side and this pain worsens with deep breaths and movement, sneezing and coughing. Other symptoms consist of abdominal swelling and loss of appetite.

What Causes Appendix to Burst?

A burst appendix is a potentially life-threatening condition. If the appendix bursts, then the contents of the appendix spread throughout the abdomen and can cause peritonitis, which is the infection of peritoneum (lining of the abdominal cavity). Peritonitis, if left untreated, can lead to other fatal infections, such as sepsis.

What are the Symptoms of a Burst Appendix?

After the appendix has burst, the patient finds relief from the pain as the pressure on the appendix as gone; however, this relief does not last long, as the burst appendix produces other symptoms and it leads to more serious issues. Patient may develop pus-filled abscesses around the appendix. Abdominal structures and scar “wall off” of the seepage and the abscessed appendix, which will prevent the infection from spreading. Symptoms of a burst appendix and peritonitis are similar to symptoms of appendicitis and include:

What is the Treatment of a Burst Appendix?

Appendectomy is done to remove the burst appendix; however, before appendectomy is done, treatment of peritonitis and abscess is done where the doctor first drains the pus from the abdomen. Antibiotics are then prescribed to fight the infection.

Some researchers differ from this treatment and suggest that immediate appendectomy of the ruptured appendix will lead to a faster recovery and lesser postoperative complications, especially in children.

What are the Complications of a Burst Appendix?

If a ruptured or burst appendix is ignored, then it can cause death in some patients. The peritonitis can quickly spread and lead to septicemia, which is an infection of the blood where the bacteria enter the bloodstream. Our body releases chemicals to fight the infection, which triggers an inflammatory response (sepsis) all over the body.

Patient will experience a chain of reactions after which eventually septic shock follows where the patient experiences a severe drop in the blood pressure. This can ultimately cause multiple organ failure, and in worse cases, death of the patient.