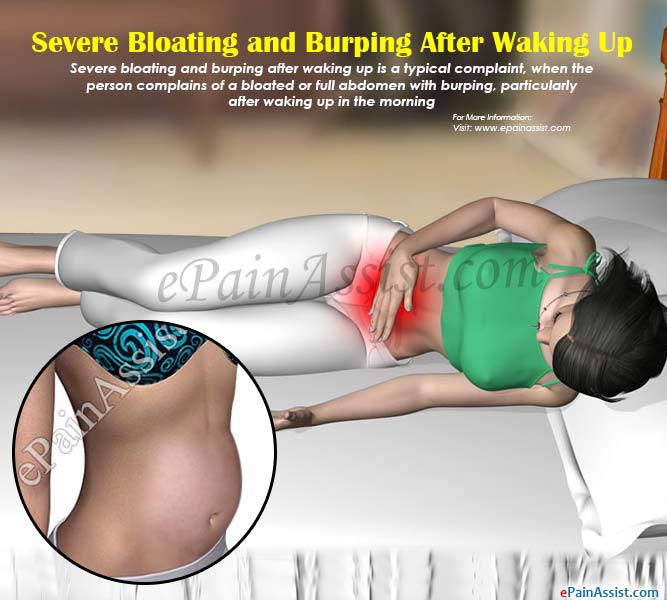 Severe Bloating and Burping After Waking Up

Moreover, if one has consumed too much of carbonated drinks, it can be another reason contributing to it. Apart from the breathing habit or habits of eating, there can be other medical reasons as well leading to severe bloating and burping in waking up in the morning. Knowing about the causes of bloating and burping after waking and its remedies can help.

Causes of Bloating and Burping After Waking Up

The main cause of burping is the accumulation of gas in the abdomen. Belching helps to release the extra gas trapped within the gastrointestinal tract. It is natural, that gas shall be either released through mouth or by way of anus as flatus. Certain factors trigger the formation of gas in the abdomen and can be considered as causes of bloating and burping. These include:

Certain medical conditions or disorders of the gastrointestinal tract too can cause severe bloating and burping after waking up, which may need appropriate medical attention.

Remedies for Bloating and Burping After Waking Up

If you are looking for remedies to manage your bloating and burping after waking, some of the solutions and home remedies can be of great help to you.

Home remedies are considered to be best solutions, as there are no side effects and can only provide great deal of benefits. However, if the complaints do not improve with these remedies, it is advisable to seek medical opinion and follow medical advice for appropriate investigations and treatment.