The connection between the mother and the fetus is maintained by the umbilical cord. This cord is connected to the stomach of the baby at one side and to the placenta on the other side, which is embedded in the womb. The umbilical cord is required to maintain the nutritional and oxygen levels within the fetus as well as it helps in the excretion of wastes and toxins from the blood stream of the fetus. It also provides immunity to the baby from various infections, by passing on the antibodies from the mother into the blood stream of the fetus.

As soon as the delivery takes place, this umbilical cord is cut down by clamping it from both the ends. After the cord is cut, a stump is left behind on the stomach of the new born which is around two to three centimeters in length. When it heals, it forms the navel of the baby. On healing, the umbilical cord dries up and falls off within first few weeks. However, in certain cases infection can occur at the stump leading to inflammation, redness and tenderness around the region along with a smelly discharge. Such a condition leads to infection of umbilical cord post birth which is called Omphalitis. The umbilical cord infection is generally caused as a result of cutting of umbilical cord under unhygienic conditions or not following hygienic care until the falling of the umbilical cord stump. Though, its occurrence is rare but when it occurs it may pose a serious threat to the life of a new born, thus it demands immediate attention. 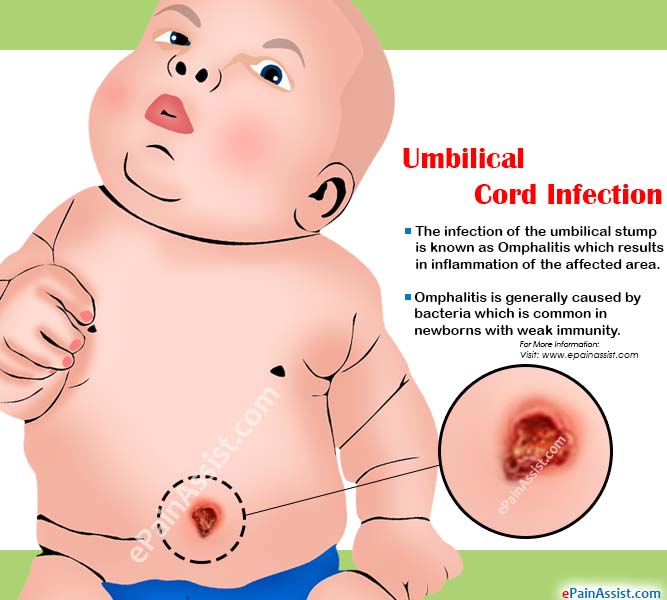 The infection of the umbilical stump is known as Omphalitis which results in inflammation of the affected area. If left unchecked, this infection gradually spreads on to the entire abdominal wall, posing a threat to the life of the new born with the probability of occurrence of diseases like myonecrosis, necrotizing fasciitis or systemic disease.

Under the normal circumstances a small amount of pus is left behind at the stump which dries off quickly in open air. In some cases, a bacterial infection may develop causing swelling and redness around the region. The symptoms of the condition usually appear within one to two weeks of the birth followed by generation of pus, fast beating of heart, low blood pressure, jaundice and fever. This can further cause sepsis within the new born posing a threat to its life. Omphalitis is known to have a high mortality rate in case the infection becomes serious.

Omphalitis is generally caused by bacteria which is common in newborns with weak immunity. The bacteria that are responsible for the infection of umbilical stump are Streptococcus, Staphylococcus aureus, and Escherichia coli. The infection is the result of the combination of both Gram-positive as well as Gram-negative bacteria. It commonly occurs in newborns who are born prematurely, suffer from immune system deficiencies, ailing with blood infections or pneumonia. It may also occur in healthy newborns in scenarios where there exist complications during the delivery like infection of placenta, prolonged duration of birth or individuals with umbilical catheters.

In the United States, the cases for Omphalitis account for about 0.5% of the total cases around the world, which has a significant rate of morbidity and mortality. The generic treatment provided post the diagnosis involves antibiotic treatment. In cases where severe complications appear, surgical measures are adopted to remove the infected stump.

The umbilical cord is required to dry up before they fall off and this does not require any special treatment. The cord naturally dries up and changes its color from shiny yellowish to greyish brown before falling off. It typically takes one to three weeks for the umbilical cord to fall; in the meantime, it can be ensured that proper hygienic practices are followed in order to prevent any chances for the occurrence of infection in the umbilical cord stump. It should be checked that the practice for keeping the tummy area clean and dry should be followed religiously. The basal area of the cord should be checked at least once a day, to check the presence of any infection. In case there exists some kind of secretions, then they should be cleaned right away by using a wet cotton swab and then left to dry. To ensure proper and complete cleaning, the skin around the stump should be bent or pushed down. There are a few precautions that should be kept in mind when such secretions are observed, so that the infection can be prevented. These precautions are:

When to call for help?

The parents should take help of a medical supervisor immediately when any of the below scenarios are encountered as it may pose a threat to the life of the baby.

Proper cleaning of the umbilical cord stump must be maintained as keeping it in unhygienic or damp conditions can increase the likelihood of infection. The umbilical cord stump must be checked often to identify any signs of infection. Keeping the stump and its base dry is of utmost importance. Umbilical cord infection could lead to serious complications and even death if left ignored or untreated. Any signs of illness, or discomfort around the stump region must be noted and reported to the child’s doctor at the earliest.