Modern medicine has been successful in eradicating numerous diseases, but there are still a few that have no cure.

Unfortunately, there is much work to be done to find remedies for such illnesses. Many such diseases have medicine to improve the quality of life and prolong life expectancy but as of today do not have any reliable and effective treatment to cure them. 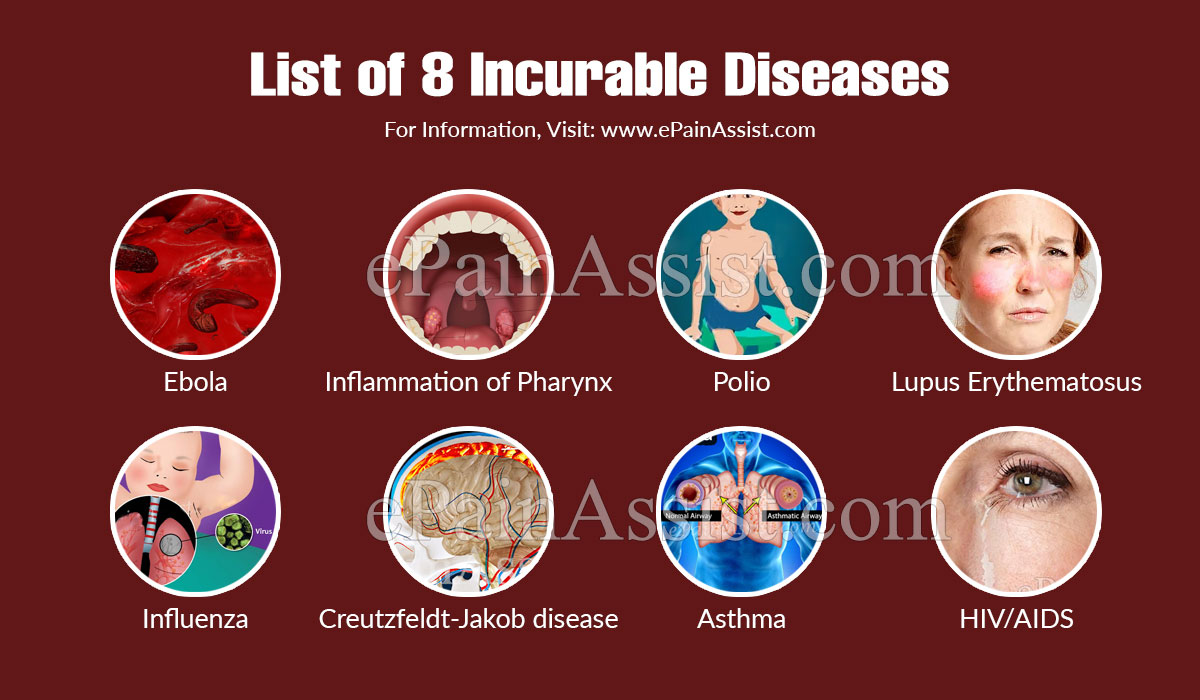 Here is a list of the top eight incurable diseases and syndromes.

Ebola is a virus of the Filoviridae family and is responsible for severe and fatal hemorrhagic fever.

Ebola outbreaks in the gorilla, chimpanzees, and humans have been recorded.

The illness presents the following symptoms:

In later stages, there might be bleeding from eyes, ear, and mouth, depression, sensitivity to pain and seizures. As the disease progresses there may be purpura, petechiae, sclerotic arterioles, and low blood pressure.

Polio, also known as poliomyelitis or infantile paralysis, is an acute and viral infectious disease of the nervous system. It spreads from person to person through the fecal-oral route.

90 percent of poliomyelitis does not cause any symptoms.

As the virus enters the bloodstream, the affected individuals show a range of symptoms. It mostly begins with general symptoms such as headache, fever, nausea, fatigue, muscle pain, and spasms and in some is followed by serious and permanent paralysis of muscles of one or more limbs, throat or the chest.

Mostly the children under the age of 5 years are affected by this condition.

There is a vaccine for the disease but if affected by poliovirus, there is no cure.

Lupus Erythematosus is an autoimmune disorder that causes chronic inflammation in different parts of the body. The condition is also known as lupus.

Lupus is of three types:

In discoid lupus, only the skin is affected. It refers to distinct reddened patches covered with brown scales that appear on the face, neck, and scalp. In a few people, the disease may evolve into a more systemic form of the disorder.

Systemic lupus erythematosus is the most common form amongst all the types of lupus. It affects any organ or structure of the body and mostly the skin, kidney, joints, heart, gastrointestinal tract, brain, and serous membranes. No two people will have identical symptoms. The course of the disease is also variable. There may be periods when the disease is active and another period when the disease symptoms might not be evident at all.

Influenza, also known as flu, is an acute viral infection of the upper and lower respiratory tract. It is characterized by fever, chills, weakness, and pain in muscles with soreness in the head and abdomen.

Creutzfeldt-Jakob disease is a rare and fatal disease of the central nervous system. It occurs throughout the world and affects one in a million people.

The disease is common in adults aged 40-70 years, and both men and women are equally affected by this condition.

The onset of the conditions is characterized by psychiatric or behavior changes followed by progressive dementia with abnormal vision and involuntary movements.

It is a fatal disease with no cure.

Diabetes is a lifestyle disorder characterized by the body’s impaired ability to produce or respond to insulin thereby altering the blood glucose levels.

There are two forms of diabetes:

Type1 diabetes also referred to as, insulin-dependent diabetes mellitus, is an autoimmune condition. In this condition, the immune system of a diabetic person destroys the insulin-producing beta cells. The body in this condition is no longer able to produce insulin.

Type2 diabetes also known as non-insulin dependent diabetes usually occurs after 40 years of age. This condition arises due to sluggish pancreatic secretion of insulin or due to reduced responsiveness of the target cells of the body to the insulin.

It makes the individual vulnerable to a variety of infections and certain malignancies and can eventually cause death.

Asthma is a chronic lung disease in which the airways get inflamed and constricted causing episodes of breathlessness, wheezing, coughing, and chest tightness.

The severity of the disease ranges from mild to life-threatening. Due to the inflammation of airways the patient becomes hypersensitive to a variety of stimuli including dust, air pollution, cigarette smoke, medications, and weather conditions.

The episodes of asthma may begin suddenly or might take days to develop.