Myelofibrosis is a rare type of chronic leukemia, which is a cancer, affecting the tissues which help in formation of blood in the body. Myelofibrosis is a fatal disorder of the bone marrow which disturbs the normal production of the blood cells in the body. This results in massive scarring in the bone marrow leading to severe anemia, fatigue, weakness and usually an enlarged liver and spleen. Myelofibrosis is classified as one of the group of diseases known as myeloproliferative disorders. Individuals suffering from myelofibrosis worsen continuously and there are some who can also develop a more serious type of leukemia. However, there are some patients who have myelofibrosis and yet live without experiencing any symptoms for many years. Treatment for myelofibrosis aims at relieving symptoms and consists of different options which are explained in this article in detail. The blood stem cells have the capacity to undergo replication and can divide into multiple specialized cells, which form our blood, such as red blood cells, platelets and white blood cells. As there is replication and division in the mutated blood stem cells, the mutation is passed onto the new cells. As the production of the newly mutated cells increase, they start having disastrous effects on the production of the blood resulting in decrease in the red blood cells and anemia, which is the primary characteristic of myelofibrosis along with excessive white blood cells with changes in platelets levels. There is scarring of the bone marrow, instead of it being spongy, in patients suffering from myelofibrosis.

Myelofibrosis tends to develop gradually. In the initial stages of myelofibrosis, many patients do not experience any symptoms. However, as there is increase in the disruption of production of healthy blood cells, patients start experiencing signs and symptoms including:

If the patient is not experiencing any symptoms and does not exhibit any signs of Myelofibrosis such as anemia, enlargement of spleen or liver, then immediate treatment is not usually required. In such cases, the patient is closely observed through regular health checkups and exams, to look for any progression of disease.

There are some patients who can remain symptom-free for many years.

Treatment comprising of Targeting the Gene Mutations occurring in Myelofibrosis

Research is going on for development of medications, which specifically target the JAK2 gene mutation, which is considered responsible for myelofibrosis. Ruxolitinib is once such medication, which along with other new medications, is being tested in clinical trials and have shown to be helpful in reducing the size of the enlarged spleen and in alleviating the symptoms of myelofibrosis. Ruxolitinib acts by stopping the action of the JAK-related genes present in the healthy cells as well as the diseased cells. As the healthy cells are also affected, patient can experience side effects, such as bleeding, bruising, infection, headaches and dizziness.

Treatment for Anemia in Myelofibrosis

For severe anemia resulting from myelofibrosis, treatment which is done includes:

Treatment for Enlarged Spleen in Myelofibrosis 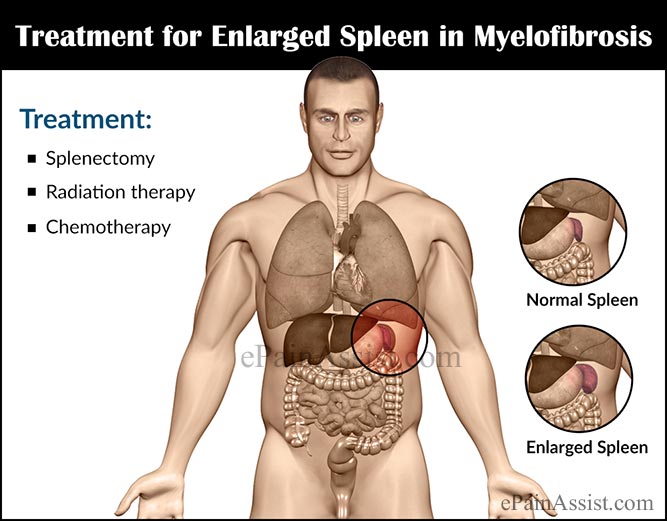