Several traits make a woman more appealing and attractive and one of them is a woman’s breasts, also considered as a sign of her sexuality. Some women have larger breasts while others have smaller ones. Knowing what the causes of large breasts in females are and how to make them smaller can help.

Breasts are mammary glands mainly made up of glandular and adipose tissues. It is during puberty that it begins to enlarge with the hormone estrogen playing a vital role in its increase. However, it is a myth that larger the breasts, more the milk secretion as the latter has simply no relation to the size of the woman’s breasts.

Some studies reveal that women who have larger breasts often experience psychological as well as physical problems and also feel embarrassed in society. Moreover, the large breasts can cause issues such as improper posture, back pain and also skin rashes under the breast area. It is commonly seen that the most women who have large breasts wish for smaller ones instead. 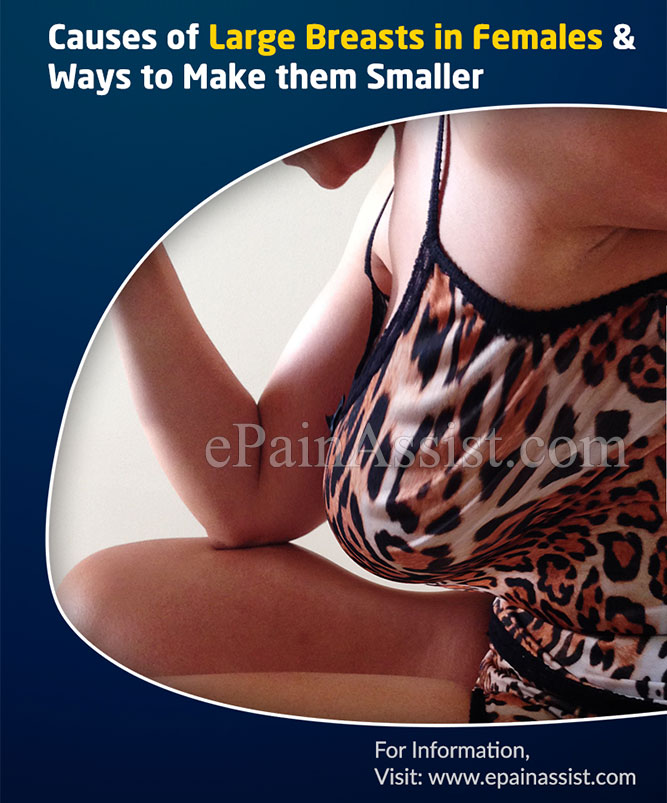 Here are the causes of large breasts in females along with natural tips to make them smaller in size.

Causes of Large Breasts in Females

If you are a female who is not comfortable with large breasts, then there are several ways in which they can be made smaller in size.

Undergoing a breast reduction surgery is one of the most common ways to make large breasts smaller in size, though it can have some side effects like pain and permanent scaring. It is necessary to take medical opinion regarding the surgical procedure and risks associated with it.

If you are not too keen on undergoing surgery to reduce the size of your breasts and make it smaller you can use these natural ways to make large breasts smaller in size.

These are some home remedies and natural ways to make breasts smaller. However, if large breasts are experienced with any other medical problem, undesirable symptoms, or if you note sudden enlargement of breasts, it is important to seek medical opinion.