What is Meniere’s Disease? 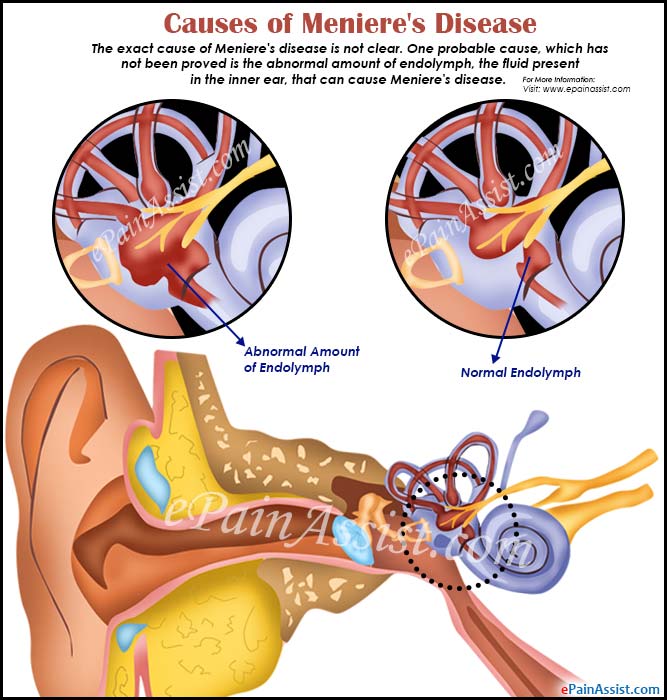 Factors affecting the endolymph which can contribute to Meniere’s disease are:

There has been no single cause, which has been proven to cause Meniere’s disease. So, it is thought to occur as a result of a combination of the above factors.

Physical exam and medical history is taken and to confirm the diagnosis of Meniere’s disease, the patient should have experienced the following:

Hearing Assessment: Audiometry is a hearing test which assesses how well the patient detects sounds at different volumes and pitches and also how accurately the patient is able to distinguish between words which sound similar. Patients having Meniere’s disease commonly have problems with hearing low frequencies or a combination of high and low frequencies with normal ability to hear in mid frequencies.

Balance Assessment: Between the attacks of vertigo, most of the patient’s sense of balance returns back to normal. However, patient may have some continuous problems with balance.

Videonystagmography (VNG) is a test which assesses the balance function of the inner ear by evaluating the movement of the eyes. Sensors which are related to balance are present in the inner ear and these are connected to the muscles, which control the movement of the eyes. Due to this connection, one can move their head while keeping their eyes focused on a point. In the VNG test, warm and cool air or warm and cool water are introduced into the ear canal. Involuntary eye movements, which occur in response to this stimulation, are measured using a special pair of video goggles.

Rotary-chair testing also measures the function of the inner ear based on the eye movement. The patient is made to sit in a rotating chair that is controlled by a computer and which stimulates the patient’s inner ear.

Posturography is a computerized test which shows the part of the balance system on which the patient relies the most and the part that is causing problems. It could be any part of the balance system, such as inner ear function, vision, or sensations from the skin, tendons, muscles and joints etc. During the posturography test, the patient is made to wear a safety harness and stand in bare feet on a platform and tries to maintain his/her balance under different conditions.

Vestibular Evoked Myogenic Potentials (VEMP) testing is a new test which helps in not only diagnosing Meniere’s disease, but also in monitoring it. VEMP test reveals the characteristic changes that occur in the affected ears of patients suffering from Meniere’s disease.

Video Head Impulse Test (vHIT) is also a new test that utilizes video to measure the reactions of the eye to sudden movement. When the patient focuses on a point, his/her head is quickly and unpredictably turned. If the patient’s eyes shift from the target when the head is turned, then it means that the patient has an abnormal reflex.

Electrocochleography (ECoG) test is used to visualize the inner ear in response to sounds. This test helps in determining if there is an abnormal accumulation of fluid in the inner ear. However, this is not specific for Meniere’s disease.

Blood tests and imaging tests, such as MRI scan can be done to rule out those diseases which can produce symptoms which are similar to Meniere’s disease. These other medical conditions include brain tumor or multiple sclerosis.

How is Meniere’s Disease Treated?

Medications for vertigo can be prescribed to be taken during a vertigo episode to reduce the severity of the attack and they include:

There are patients who can benefit from noninvasive procedures, which include:

Middle ear injections where the medications are injected into the middle ear, which then get absorbed into the inner ear help in improving the symptoms of vertigo:

Surgery is done if the other treatment modalities do not help the patient and if the vertigo attacks from Meniere’s disease are so severe that they are debilitating to the patient. Surgical procedures include: