A majority of the population has experienced muscle pain at some point in their life or the other. Among these, people complaining of pain in the back surpass people suffering from pain in other regions by a considerable extent. Pain in the Latissimus Dorsi is one such condition where pain is felt in the spinal area, shoulder and upper arm of the body. While a majority of people suffering from latissimus dorsi pain can get relief by following a corrected lifestyle pattern, rest and certain exercises, some of the cases may require special care and attention. 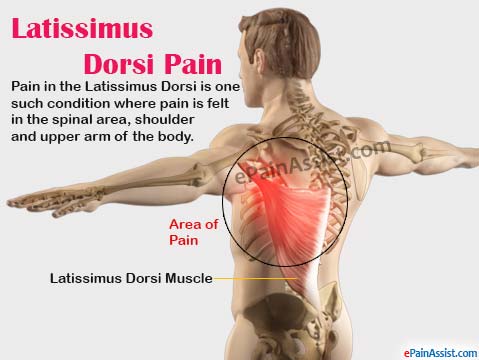 Derived from the Latin term, ‘latissimus’ meaning broadest and ‘dorsum’ meaning back, Latissimus Dorsi basically refers to the broadest muscle present in the back of our body. Commonly referred to as ‘lats’ among bodybuilders, this muscle is the flat, larger, dorso-lateral muscle on the torso, to the rear end of the arm and partly concealed by the trapezius on its central dorsal area. These muscles are connected to a considerable portion of the lower spine by a coat of tissue known as thoracolumbar fascia. The muscle rises up to meet the shoulder area and is secured to an indentation on the humerus, commonly known as the upper arm bone.

Under idle circumstances, the Latissimus Dorsi performs the following functions-

Pain in the Latissimus Dorsi muscle is generally characterized by minor changes in the muscle activity or alteration in the position. The symptoms by which one can recognize latissimus dorsi pain include –

Though it may be difficult to identify a definite event that leads to Latissimus Dorsi pain, the above symptoms can definitely aid patients in recognizing the affliction and get treated for the same.

The Latissimus Dorsi muscles are in a state of constant activity as majority of the activities performed by the body make use of these muscles. Pain may develop in the muscle due to the enumerated causative factors-

The Latissimus Dorsi muscle is unlikely to cause trouble even when it is “tight” or has “tender points“. Hence, it might be difficult to comprehend even if there is anything wrong with the muscle and thus a careful identification is required to diagnose the condition.

Physicians use a number of techniques in order to diagnose a patient suffering from pain in the Latissimus Dorsi region, chief among which is the differential diagnosis which includes- Treatment of Latissimus Dorsi pain is quite a simple process but is subject to a long duration. The American Academy of Orthopaedic Surgeons have endorsed the standard healing protocol abbreviated as RICE, that is, Rest, Ice, Compression and Elevation to bring about a significant change in the condition of the patient. Allowing the affected muscles to relax and rest leads to faster healing and growth of new tissues while icing is likely to reduce the swelling and act as a natural pain relief. Compressing the affected area also helps with inflammation while elevation catalyzes the healing procedure by reducing swelling and returning the blood to the heart.

The healing protocol of RICE is generally accompanied by certain strengthening exercises which act as catalysts to the healing process and enable patients to get back to normal activities.

Pain in the Latissimus Dorsi region can be acquired at any point of time, such as, during lifting children, at the gym, while rowing, swimming, playing baseball and the like. However, one could go for certain preventive measures in order to avoid the pain altogether.

The enumerated preventive measures along with a balanced healthy diet and exercise can bring about a significant change in avoiding and even curing pain in the Latissimus Dorsi muscle.