What Can Cause Brain Aneurysm or Cerebral Aneurysm and How is it Treated?

Brain aneurysm or cerebral aneurysm is a ballooning or a bulge in a blood vessel inside the human brain. This usually resembles a berry that is hanging from a stem.

It is uncommon for most brain aneurysm to rupture but symptoms or other health issues occur. When conducting other test on an individual is the time when this type of aneurysm will be detected. 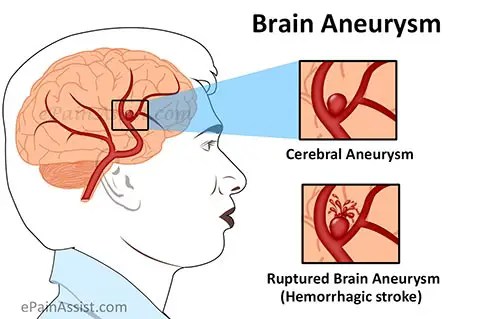 Rupturing of an un-ruptured aneurysm can be prevented from occurring if appropriate treatment is administered appropriately.

When the walls of the brain arteries become thin brain aneurysm occurs. Branches or folks are often formed in arteries owing to the fact that they are weaker.

Arteries found at the base of the brain are commonly affected by aneurysm despite the fact that it can come up in any side of the brain.

What are the Signs and Symptoms of Brain Aneurysm or Cerebral Aneurysm?

Below are the Signs and symptoms of ruptured aneurysm:

The main symptom of a ruptured aneurysm that is ruptured is a headache that is severe and sudden. The description of the headache that results has been called the “worst headache” ever to be experienced.

A small amount of blood can leak as a result of aneurysm leak. Severe headache that is sudden can only be caused by the leaking (sentinel blood).

A leaking is always followed by a more serious rupture.

Development of a sudden headache that is extremely severe must prompt you to seek medical attention immediately.

What are the Risk Factors for Brain Aneurysm or Cerebral Aneurysm?

Brain aneurysm or Cerebral aneurysm which results due to weakness of the artery can be due to various factors that contribute to this. Women are commonly affected more than men and mainly adults that children

The risks factors are sometimes present during birth and some are developed overtime.

Following are the risk factors of brain aneurysm or cerebral aneurysm present at the time of child birth:

What are the Complications Involved in Brain Aneurysm or Cerebral Aneurysm?

Bleeding will only last for a few seconds when there is a rupture due to brain aneurysm. Cell that surrounds the rupture can die and also it can easily be damaged. The skull’s pressure will increase as a result.

Death may occur or you lose consciousness because of elevated pressure which hinders the supply of oxygen and blood.

After an aneurysm rupture the following complications can develop:

What Tests are Conducted to Diagnose Brain Aneurysm or Cerebral Aneurysm?

You will have to go through a series of test to ascertain the type of brain aneurysm or cerebral aneurysm you have or if you have had a bleeding between the space in the brain and tissues surrounding (subarachnoid hemorrhage). This is always if you have any symptoms that are exhibit characteristics of a ruptured aneurysm or headache that is sudden and severe.

Your emergency care attendants will determine the cause of the bleeding of the brain if it was due to a ruptured brain aneurysm or ruptured cerebral aneurysm.

The same test will be conducted if you have experience symptoms of brain aneurysm that has not ruptured for example paralysis on one side of your face, vision changes, pain at the back of the eye.

The diagnosis procedures include:

This is the first test of determining if a bleeding has occurred in the brain. A CT scan mainly entails an X-ray test. 2-D images are produced that are the brain’s “slices”.

Your cerebrospinal fluid (fluid around the brain and the spine) will be having red blood cells for brain aneurysm or cerebral aneurysm,if subarachnoid hemorrhage has occurred.

If evidence of bleeding has not been shown by a CT scan then your doctor will order a cerebrospinal fluid test for a ruptured aneurysm.

A spinal tap or lumbar puncture is the process of drawing cerebrospinal fluid using a needle your back.

2-D or 3-D images of the brain will be created through radio wave and magnetic field used by an MRI for brain aneurysm or cerebral aneurysm.

A ruptured aneurysm can be detected by an MRI which assesses the arteries precisely (MRI angiography).

This procedure is also known as cerebral arteriogram and it entail the insertion of thin tube that is flexible (catheter) into an artery that is large. This passed via your groin and then goes through the heart to the arteries in the brain. A dye injection goes through the body to the brain in a specialized manner to detect brain aneurysm or cerebral aneurysm.

It is not recommended in general to use imaging tests when screening for brain aneurysm or cerebral aneurysm that is un-ruptured. It is worth discussing the benefits that might accrue if you have:

How is Brain Aneurysm or Cerebral Aneurysm Treated?

Loss of blood flow or bleeding is the risks that are posed by both procedures. It may be safe to use endovascular procedure but it is less invasive. It may be necessary to perform extra procedure of re-bleeding occurs subsequently.

Your neurologist collaborating with your intervention neuroradiologist or neurosurgeon will recommend basing on the location, the general appearance, size of the brain aneurysm and the procedure you are able to undergo among other factors.

Other Treatments for Brain Aneurysm or Cerebral Aneurysm

Complication management and relieving symptoms are the aims of other treatments procedures of ruptured brain aneurysm or ruptured cerebral aneurysm.

The un-ruptured brain aneurysm or cerebral aneurysm can be sealed off with endovascular or surgical clipping to prevent re-rupturing. The benefits can be outweighed by the risk involved in the procedure.

The determination of the appropriate treatment for you will be for your intervention neuroradiologist, neurosurgeon or your neurologist.

The recommendations for unruptured brain aneurysm or cerebral aneurysm will be made based on:

In case of high blood pressure it is recommended that your doctor is aware of the medication of managing the condition. Controlling properly the blood pressure reduces risks of rupturing of the brain aneurysm or cerebral aneurysm.

The risk factor that has been known is that smoking cigarette increases the growth, formation and rupturing of aneurysm. Thus, is wise to control your provider on how to stop the habit.

The following are the factors that are not in the individuals hands when it comes to brain aneurysm or cerebral aneurysm:

Factors which are in your control:

What Are The Ways To Prevent Pediatric Brain Tumors & Do They Reoccur?