Warning: Undefined array key 0 in /home/epaina6/public_html/wp-content/plugins/tz-guard/helpers/browser_detection.php on line 717
 What is the Cause of a Brain Aneurysm?
Subscribe

Brain aneurysm takes place whenever wall of an artery becomes weak and results in an abnormal bulge of a large size. This bulge thus formed may rupture and result in internal bleeding. Aneurysm takes place in any area of a patient’s body; it is common in aorta, brain, spleen and legs.

However, aorta is the most common location to cause brain aneurysm. It is the biggest artery of human body and carries blood from one’s heart in downward direction towards the abdomen, lower body and pelvis before branching into either of the two legs.

On the other side, it may affect arteries responsible to carry blood rich in oxygen towards the human brain and in this case, aneurysm resembles a berry present on any stem. Along with this aneurysm may form in arteries of neck, legs, and kidneys and even inside the heart walls in patients. 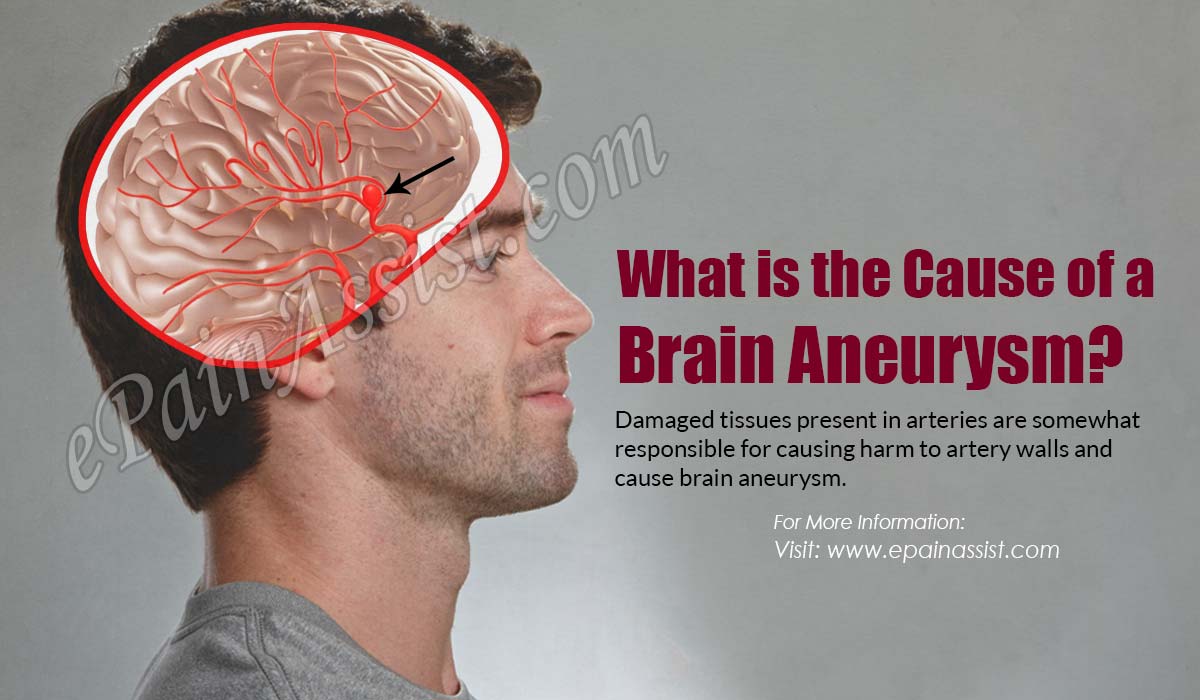 What is the Cause of a Brain Aneurysm?

Until now, medical research groups and doctors have not become able to find out the exact cause associated with the problem of brain aneurysm. However, they have identified a few specific factors, as contributing to such conditions. These include:

Damaged Tissues and Fatty Deposits/Blockages: Damaged tissues present in arteries are somewhat responsible for causing harm to artery walls and cause brain aneurysm. Fatty deposits or blockages may cause harm to arteries and at the same time, they activate the heart to pump in relatively hard way than it is necessary for pushing blood before the fatty buildup. This stress may cause damage in arteries due to increase in pressure.

Atherosclerotic Disease: Patients of atherosclerotic disease also remain at relatively higher risk to suffer from the problem of brain aneurysm. This is because; such patients often have a form of plaque formation in the arteries. This buildup is because of plaque i.e. a hard substance, which may cause damages to arteries and prevents free flow of the blood.

Other Causes of Brain Aneurysm Problem in Humans:

Excluding the basic causes mentioned before, the problem of brain aneurysm in patients takes place because of other factors, as mentioned here.

Genetic Disorders: Inheritance or genetic factor has its role in approximately 20% of aortic aneurysm problems. Hereditary conditions, such as Ehlers-Danlos and Marfan syndromes may make arteries walls weak than before.

Congenital Malformation: A few people born with aorta defects, because of which their brain arteries and/or heart valves make them relatively susceptible towards the problem of brain aneurysm.

Trauma: Blow into the head or in the chest may cause injury to a person or makes his/her artery weak directed towards the problem of aneurysm.

Atherosclerosis: Atherosclerosis is a type of chronic health condition, where the formation of fatty plaques take place on inner regions of arteries resulting in weakening, narrowing and hardening of arteries.

Infections: Tuberculosis, syphilis and other similar types of infections may attack and cause weakening of artery walls in patients.

Vasculitis: Vasculitis is a type of autoimmune condition, where immune system of one’s body attacks his blood vessels to cause inflammation and damage.

Menopause: Most of the times, reduction in estrogen levels in women may weak their arteries and increase the risk related to aneurysm.