Does Spinach Cause Gas? Nutrition Facts of Spinach & its Health Benefits

A good diet comprises of all the essential vitamins, minerals and also protein. Having a balanced diet is recommended always for keeping the body in a healthy state. A diet which consists of fruits, vegetables, green leafy vegetable, grains and cereals, and protein whether obtained from pulses or from animal is an ideal diet to stay fit. Green leafy vegetables contain a lot of vitamins and minerals in them which is vital for the body. Spinach is one such leafy vegetable which has loads of essential nutrients in it.

Spinach, scientifically known as Spinacia oleracea, is an edible plant leaf that is usually available in Central and South-western Asia. Spinach is very high in nutritional value with high amount of iron, vitamin A, B2, C and K and also contains a lot of magnesium, manganese, potassium and calcium. However, due to its high nutritional value some people might not be able to tolerate it well and experience discomforts in digestion process. Some also complain of having bloated feelings and gas post spinach consumption. Let us know if spinach causes gas, how to prevent gas formation due to spinach and the nutrition facts and health benefits of spinach.. 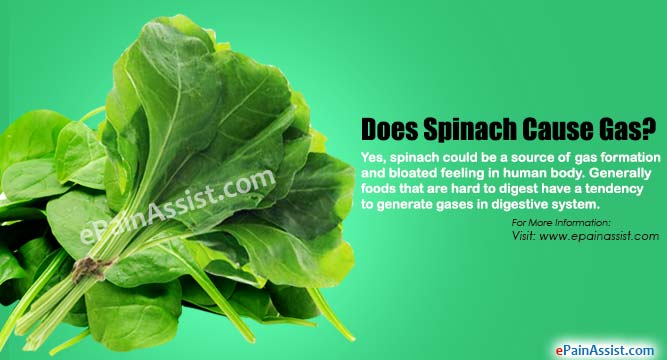 Does Spinach Cause Gas?

Yes, spinach could be a source of gas formation and bloated feeling in human body. Generally foods that are hard to digest have a tendency to generate gases in digestive system. Foods that are rich in fiber like spinach contains good quantity of oxalate that do not break down entirely during digestive process and thus there is tendency to form gas. However, it’s just not the spinach but more so the wrong eating procedure of spinach to blame for the formation of gas.

Why Does Spinach Cause Gas?

Spinach is rich in fiber thus good quantity of oxalic acid is present in spinach, which can sporadically combine with iron and calcium leading to formation of corresponding oxides. The body cannot absorb these minerals which then stay in the large intestine for a long time. This is then fermented by the bacteria that normally reside in the gastrointestinal tract, thus producing gases.

How to Avoid Gas Formation Due to Spinach?

Spinach is full of healthy nutrients, but it has a few side effects too. Formation of gas is one such side effect which can be controlled to a good extent if it is eaten in the right manner. Here are some very scientific ways to eat spinach that will cause lesser gas or no gas at all:

As a whole, spinach can be tried with any other food ingredient to reduce its gas formation characteristic. It is better to boil it for a few minutes if eaten without any other ingredient. The aim should be to reduce the percentage of oxalate from it so that it is digested swiftly.

In 100gm of Spinach the nutritional ingredients are found in the following weights:

Spinach is a wholesome food. It has many health benefits and it is one of the best sources of vitamins and minerals. Amongst its usefulness’s, spinach helps in improving eyesight, keeping blood pressure at normal range, helps to keep muscles stronger, controls cataracts, atherosclerosis, and heart attacks. It has multiple of neurological benefits, anti-ulcerative benefits, bone mineralization capacity, anti-cancerous benefits, skin protective capacity, healthy fetal development, and improved growth for infants. However, its side effects especially the formation of gas in stomach cannot be ignored. This doesn’t mean that human should avoid spinach. It is advised by the experts that spinach should be taken with other foods that have the capacity to nullify its bad ingredients to decrease the probability of formation of gas in the digestive system.