Know What is Skewfoot or Serpentine Foot and its Treatment

What Is Skewfoot Or Serpentine Foot?

Skewfoot is the name given to a congenital birth defect during the formation and growth of bones in the foot of the baby. It is also known by the name of Z foot or Serpentine Foot. It is also considered to an acute form of a foot deformity called as Metatarsus Adductus. In this deformity, the baby’s foot has a “C” shaped appearance to it. Specially made shoes and rigorous stretching exercises are done until the child is big enough to ambulate, although it may not be good enough to correct the deformity. Diagnosing Skewfoot or Serpentine Foot is a difficult condition to diagnose because initially the bones of the baby are not adequately developed and when x-rays are taken of the affected foot it basically comes out clear, hence it is difficult to exactly estimate the shape of the bones of the foot at that stage but by the age of 6 the bone gets completely formed and the shape of the Skewfoot can be clearly observed on the x-ray or MRI scan. 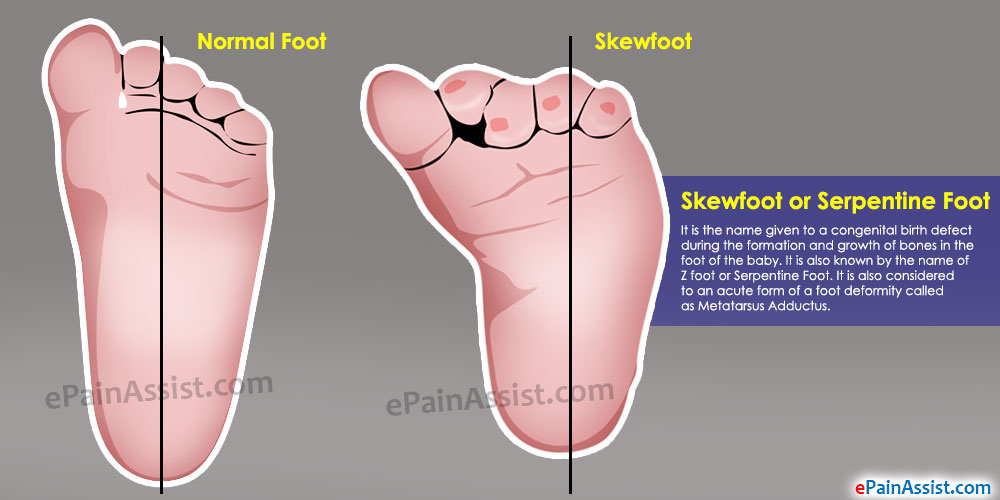 What Causes Skewfoot Or Serpentine Foot?

How Is Skewfoot Or Serpentine Foot Diagnosed?

How Is Skewfoot Or Serpentine Foot Treated?

To treat this condition, the child can me made to wear extra wide shoes with inserts for comfort for some years and by the time the child is four years of age and has significant symptoms of pain and difficulty with walking then surgical options may be considered. Basically Skewfoot or Serpentine Foot has three parts. In the first part, the metatarsal bones are turned inwards. The second part is that the shape of the first cuneiform bone is abnormally shaped in the form of a triangle which further causes the foot to move inwards. The third part is the misalignment of the ankle, heel, and navicular bones. Surgery is the most preferred measure to correct this deformity. The surgical procedure consists of cutting the bones and tightening the stretched ligaments and then using casts or pins to keep the bones in their place. Majority of children are unable to walk while they are casted for about six weeks postprocedure. After that, another x-ray is taken to look at the healing process and if there is positive healing seen then the child may be put in a walking cast for another month. The main aim of casting and surgery is to make sure that the foot of the child is flexible enough so that the child can walk and function normally and can wear regular shoes but to achieve this goal it is vital to make sure that this deformity is kept at bay and it does not recur with regular checkups making sure that the bones are growing in normal fashion.