Naegleria infection is a rare infection of the brain that has a high mortality rate. It is a fatal disease. Its causative organism is an amoeba (Naegleria fowleri). It survives in fresh water sources like lakes, rivers, ponds, and swimming pool. Most of the people who swim, dive or jumps in the fresh water are not infected by this amoeba. It enters into the body through the nose when contaminated water is forced into the nose. 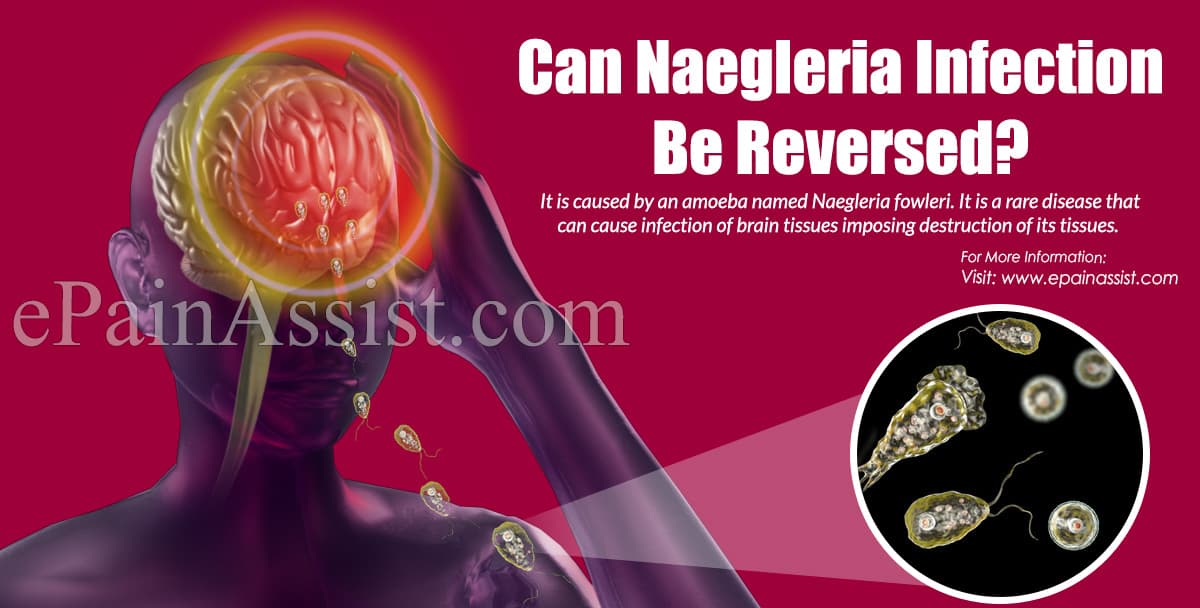 Can Naegleria infection Be Reversed?

Naegleria infection is caused by an amoeba named Naegleria fowleri. It is a rare disease that can cause infection of brain tissues imposing destruction of its tissues. Naegleria fowleri lives in warm non chlorinated water, especially in freshwater sources like river, ponds, lakes, hot springs and swimming pools. It cannot cause infection directly through the skin. Its infection happens when the infective amoeba enters the brain through the nose. It causes inflammation and damage to the brain tissues.(1)

Naegleria fowleri is a thermophilic (warm temperature loving) organism. It is an amoeba which is found in freshwater sources such as lakes, rivers, and swimming pools. Its growth happens best at a high temperature of 46 degrees C (115 degrees F). However, it may survive for a short time if temperature increases and die when the temperature drops down.(2)

Naegleria fowleri leads to infection when the warm fresh water is forced into the nasal cavity during diving or jumping into the warm freshwater sources. It causes primary amoebic meningoencephalitis (PAM). Its symptoms usually begin in 5 days after the exposure to the infectious agent. Its symptoms include nausea, vomiting, fever, pain in the head, confusion, and stiffness in the neck, hallucinations, loss of balance, seizures, and hallucinations which is followed by death within a week. When its symptoms begin, then the infection progresses rapidly. In most of the cases, death happens in 1 to 9 days.(2)

Fortunately, naegleria infection is a rare disease and it does not develop in each person who is exposed to the infective species of amoeba. Not all the people who swim in the freshwater lakes develop this infection. Only a small number of people who dive or jump in the contaminated water develops the infection. Drinking contaminated water cannot cause this infection. This infection happens when the contaminated water is forced into the nose while jumping or diving in the fresh water. The infective amoeba then enters the brain and cause an inflammatory reaction in the brain tissues. It then leads to the destruction of the brain tissues that result in permanent damage to them. It then results in PAM resulting in death in a week.(3)

Naegleria infection can be treated with the antifungal drug, amphotericin B primarily. It is given through injections intravenously or in the spinal cord to disinfect the amoebas. Miltefosine, a drug is available in the market that can treat naegleria infection in an emergency. It is found in many clinical trials that this medicine along with other medicines can be used aggressively to manage inflammation of the brain. It has been reported that it may promote improved survival.(3).

Naegleria infection can be prevented with the use of nose clips in freshwater. According to the CDC, avoiding swimming in shallow warm freshwater bodies can also prevent the risk of Naegleria.(3)

Naegleria infection is a serious infection that can cause death. It is caused by amoeba named Naegleria fowleri. It infects only when it enters the nose and reach the brain through the olfactory nerve. It can be reversed only in few cases where early diagnosis is made and treatment is given.