The ear is one of the most important organs of the body. It not only helps us hear the outside world but also plays a crucial role in maintaining balance. The ear has three parts namely the outer, middle, and inner ear. The outer ear as the name suggests is the visible part of the ear and comprises of the pinna. It is the external auditory canal that connects the outer ear to the middle ear. The middle ear and the outer ear are separated by the eardrum. The middle ear has three connected bones called ossicles and a canal called the Eustachian tube. The sound waves are transmitted from the middle ear to the inner ear by the ossicles. The function of the Eustachian tube is to regulate pressure within the middle ear so that sound waves can be transmitted without any glitch.[1,2]

The inner ear has three components of which two parts namely the vestibule and the semicircular canals help in regulating balance and cochlea which has nerve endings which help us hear things. If any of the parts mentioned above does not function properly, hearing gets impaired. Additionally, there are times when a person notices bleeding from the ear. This can be caused quite alarming and even scary for some.[1,2]

Ear Bleeding can be caused due to a variety of reasons of which some may be potentially serious and some may be quite benign like just a simple cut. However, if a person is not sure whether the bleeding from the ear is caused by just a cut, a visit to a physician is recommended to identify a cause and start treatment for it.[1,2] The article below highlights some of the potential causes of ear bleeding and what can be done about it. 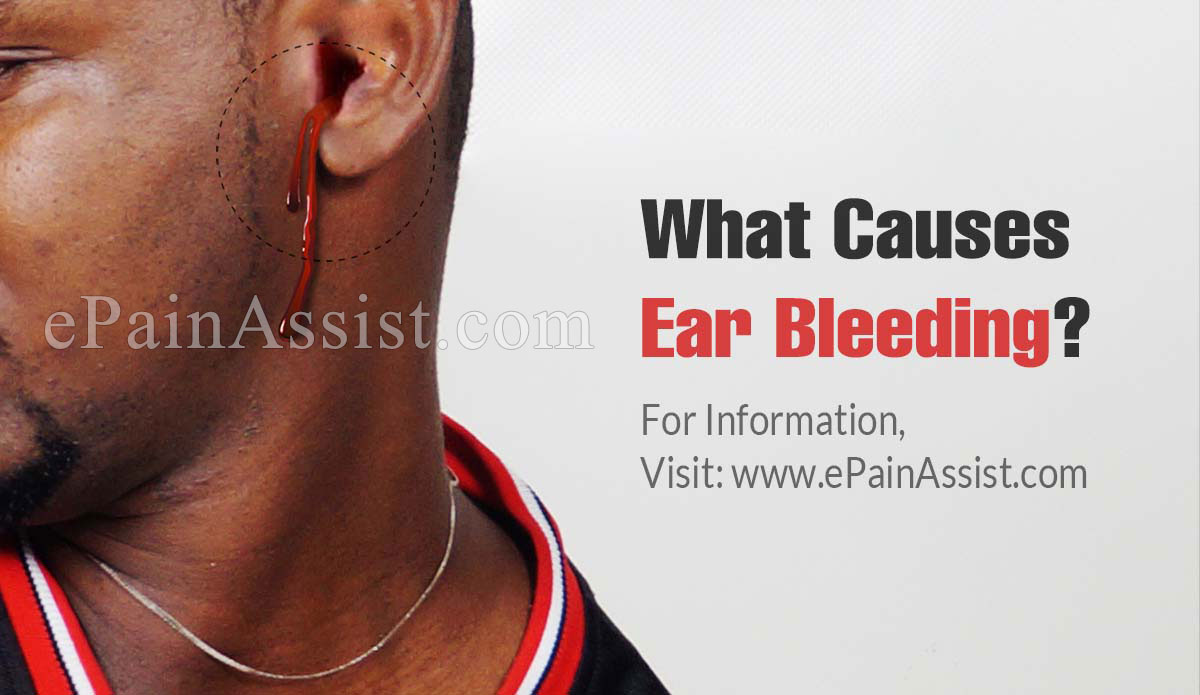 Bleeding in the ear can be caused by something as benign as a superficial external ear injury to something as serious as ear cancer or a ruptured eardrum. Mentioned below in detail are some of the causes for bleeding from the ear:[2]

Superficial Injuries: This is quite a common cause for bleeding from ears. Any type of trauma to the skin of the ear like a cut or a wound can cause bleeding from the ear. In such instances, there will be no other symptoms other than bleeding from the site of the injury. A person can also injure the ear while cleaning it using a Q-tip aggressively. People who get ear piercing done can also have ear bleeding due to irritation or infection.[2]

Foreign Objects: This is more common in children than adults. It is quite common for children to stick small toys or beads in their ear while playing. They may forget it and the object may be stuck in the ear. This may at times result in bleeding and discomfort. The child may complain of pain and on inspection the foreign object will clearly be visible. The bleeding and pain resolves once the object is taken out.[2]

Head Injury: This is one of the more serious causes of bleeding from the ear. This is seen mostly in severe head injuries, especially after a motor vehicle crash or a fall from a height. In most cases, if a head injury is followed by bleeding from the ears then concussion is the likely result. Other symptoms of concussion include headaches, tinnitus, headaches, nausea with vomiting, confusion, altered awareness.[2]

It is also possible that the bleeding may be occurring as a result of a skull fracture. Thus it is imperative for a person with bleeding in the ears after a head injury to get checked up in the emergency room immediately.[2]

Infection: Certain ear infections at times also cause bleeding from the ears. This is seen in children more than in adults even though both may have it. If the infection is in the outer or middle ear then it is more likely to cause bleeding. In addition, the person will have fever, headaches, ear discharge, pain, and hearing problems.[2]

Ruptured Eardrum: This is yet another cause of bleeding from the ears. The eardrum is extremely sensitive and thin membrane. Thus it can be easily ruptured without even realizing it. A ruptured eardrum will cause pain in addition to bleeding. Most probable causes for a ruptured eardrum are infection and injury. Other symptoms of a ruptured eardrum include tinnitus, ear discharge, ear fullness, and dizziness.[2]

Barotrauma: This is defined as a condition in which there is damage to the ears as a result of changes in air pressure or altitude. This can be seen in frequent fliers or deep sea divers. This can at times result in bleeding from the ears. Additionally, the person will also have pain in the ears, hearing loss, ear pressure, tinnitus, and dizziness. The symptom onset is almost immediate after a change in altitude or air pressure.[2]

Ear Cancer: This is one of the more serious causes of bleeding from the ear. It is quite rare and can affect any part of the ear. Ear Cancer mostly occurs as a result of skin cancer on the outer ear. The risk of ear cancer however increases in people who have a history of persistent ear infections for more than 10 years.[2]

The cancer in such people generally develops in the inner or middle ear. Aside from bleeding, a person with ear cancer will also have hearing impairment, pain, partial facial paralysis, tinnitus, and headaches.[2] What To Do About Ear Bleeding?

Now that we know about the potential causes for ear bleeding, it is also important to know what can be done about it. To begin with after presenting to the physician with the complaint of ear bleeding, a visual inspection of the ears will be done. Some imaging tests may also be done to look into the probable causes of ear bleeding. In case if an infection is identified as a cause for ear bleeding, then the patient will be put on a course of antibiotics.[2]

The patient will be asked to protect the ear from any kind of dust or debris and prevent any water from entering the ears. The patient will also be given pain medications to control discomfort. Warm compresses are also found to be quite beneficial to calm down the pain and inflammation. In cases of concussion and head injuries causing ear bleeding then hospital monitoring may be required to closely monitor the patient.[2]

If a cut or a bruise is causing the bleeding then just bandaging it and avoiding picking at the injury site is good enough to stop the bleeding and discomfort. Ear bleeding caused by barotrauma resolves once the air pressure comes back to normal. In cases of ear cancer and other serious causes aggressive treatments are required which will include even surgical procedures.[2]

When it comes to complications from ear bleeding, for minor causes like cuts or bruises there may not be any long lasting complications. However, there are some infections or a head injury which leave a significant impact on the life of the patient. These complications include permanent hearing loss, permanent tinnitus, frequent bouts of headaches, problems with balance, and vertigo.[2]

With regard to the overall outlook for ear bleeding, it is quite good for most cases. In majority of the cases, ear bleeding resolves after treatment without any issues.

However for serious causes like ear cancer the prognosis depends on the extent of the cancer and how much it has spread. For infections and injuries, balance issues and hearing loss may persist for some time.[2]

In conclusion, ear bleeding can have numerous causes which can be as benign as a superficial cut to something serious as a head injury to even ear cancer. Certain infections may also be one of the causes of ear bleeding. Treatment for ear bleeding depends on what is causing it. For minor cuts and wounds there is nothing more to be done other than a bandage and avoidance of debris or dust to the area.[1,2]

For more serious cases like head injury admission to the hospital for close monitoring may be required. For cases where ear cancer is the cause of bleeding then surgery may have to be done along with other standard treatments for cancer. Generally ear bleeding is not a cause for concern but it is mandatory for people to get it checked out and rule out anything sinister going on in the ear that is causing the bleeding.[1,2]