What Causes Stomach Pain At Night & How To Prevent It?

Stomach pain at night is quite a common occurrence in both children and adults. It can be caused due to a variety of reasons which can be as harmless as indigestion to something more serious as cancer. In majority of the cases, stomach pain at night does not require treatment and goes way with simple modifications of the lifestyle or over-the-counter medications. However, if it is caused due to some serious underlying medical condition then it needs to be diagnosed and treatment should be started at the earliest. A serious cause of stomach pain at night will almost always be accompanied by other symptoms like shortness of breath or appetite loss [1].

It is quite often that people eat very close to bedtime. This means the food will be digested when the individual is lying down and sleeping. This increases the chances of the stomach acid to regurgitate back up through the esophagus causing stomach pain at night. People who have a known diagnosis of sleep disorders also are prone to stomach pain at night. This is because sleep disorders generally worsens the symptoms of gastrointestinal conditions like irritable bowel syndrome or ulcers. Even though most causes of stomach pain at night are benign there are some instances where it is important to consult with a physician [1].

This is especially if the symptoms have been occurring for more than a week. A consultation with a physician is also recommended if the pain is constant and disturbs sleep persistently. If the stomach pain at night is not relieved by over-the-counter pain medications then it may be a sign of an underlying medical condition. An individual should also seek attention of a physician if he or she has fever, breathing problems, unintentional weight loss, and visible swelling around the abdominal region in accompaniment with the stomach pain at night [1].

Abdominal tenderness is also one of the symptoms of an indwelling pathological condition and needs to be checked. This article gives an overview of some of the potential causes of stomach pain at night and ways to prevent the condition [1]. 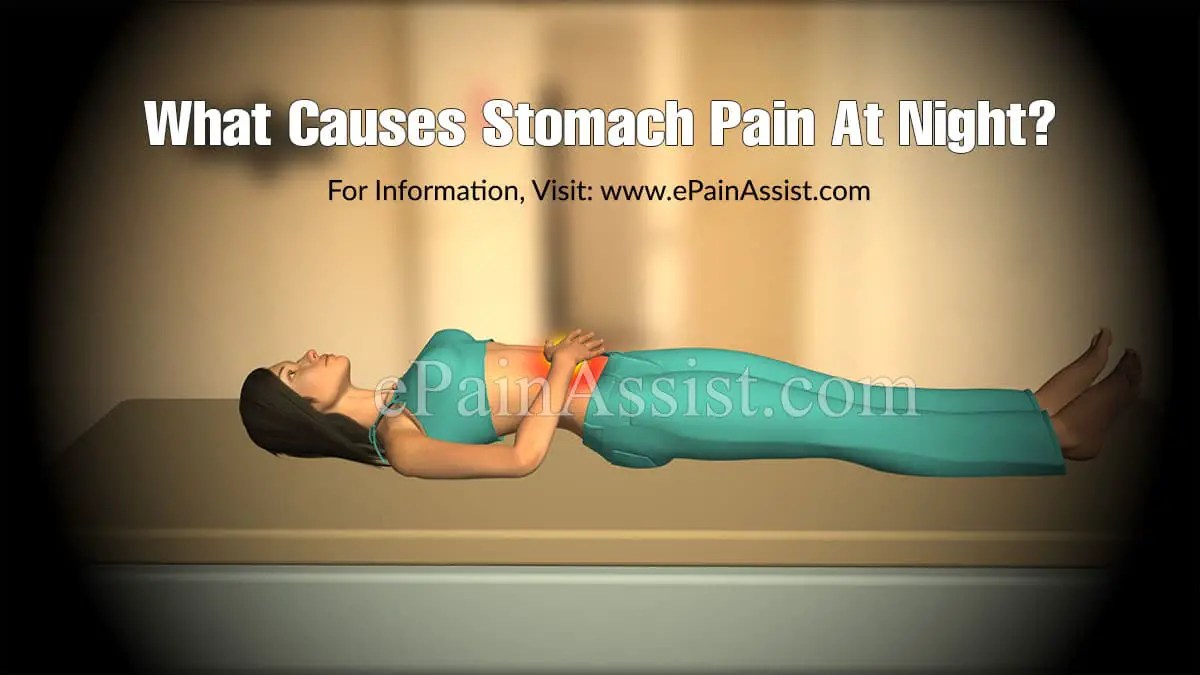 What Causes Stomach Pain At Night & How To Prevent It?

Some of the potential causes of stomach pain at night include:

Acid Reflux: This condition occurs when the acids in the stomach regurgitate up the stomach from the esophagus and enters the throat or the mouth. This causes severe burning sensation in the esophageal region along with nausea, vomiting, abdominal bloating, cough, and stomach pain [1].

There are various causes as to what causes acid reflux including excessive alcohol consumption, eating hot and spicy food, lying immediately upon completing the dinner, and obesity [1].

If acid reflux is believed to be the cause of stomach pain at night then the patient will have to undergo an upper GI endoscopy to check for signs of inflammation or irritation of the esophageal region. Generally lifestyle modifications treat acid reflux in majority of the cases along with using over-the-counter antacids [2].

Stomach Disorders: The most common cause of stomach pain at night is gastroesophageal reflux disease. This occurs when there is inflammation of the lining of the esophagus. It also causes nausea, heartburn, and indigestion. These symptoms tend to get worse when lying down.

Gastritis: Another stomach disorder that can cause stomach pain at night is termed as gastritis. This condition occurs when the lining of the walls of the stomach get inflamed. It can cause severe pain and burning in the stomach along with nausea, vomiting, and bloating [2].

The most common cause of gastritis is H. Pylori infection. In some cases gastritis can also be caused due to an autoimmune response from the body where the immune system mistakenly attacks the cells and tissues that line the stomach causing inflammation and irritation. If the condition remains untreated then it can cause ulcers or bleeding. The worst case scenario, an individual with gastritis can also develop cancer of the stomach [3].

Stomach Ulcers: Ulcers that form in the intestines and the stomach may also cause stomach pain at night. This pain tends to get worse when lying down to sleep. In some cases, the pain worsens immediately after eating food. Prolonged use of NSAIDs and bacterial infections are believed to be the most common cause of stomach ulcers [1].

In some cases, people with stomach ulcers tend to have black tarry stools or may have hemoptysis. In such instances, it is better to go to the nearest emergency room for treatment as this may be a sign of internal bleeding [4].

Gallstones: This is yet another common cause of stomach pain at night. The gallbladder lies beneath the liver and functions by storing and releasing bile. The fat content in the food causes the gallbladder to release bile into the intestine. An individual is said to have gallstones when the bile stored in the gallbladder combines with fat and forms crystalline lumps [5].

80% of cases of gallstones in the United States are due to cholesterol. Generally, apart from stomach pain at night there may not be any symptoms and no treatment is required for gallstones. However, in case if the discomfort persists and affects the quality of life of the patient then physicians may choose surgery for removal of the gallbladder. Severe cases of gallstones can cause nausea and vomiting, and jaundice of the skin in addition to the stomach pain at night [1].

Irritable Bowel Syndrome: This is yet another cause for stomach pain at night. This pain usually starts immediately after eating. It will also be accompanied by gas and abdominal bloating. Irritable bowel syndrome is observed mostly in people under the age of 50 [1].

Celiac Disease: This is a condition that is caused in individuals who are sensitive to gluten. This product is present in abundance in wheat, barley, and rye and is used in making different types of food products. Allergy to gluten will cause inflammation in the small intestine resulting in excruciating stomach pain especially at night along with abdominal cramping [1].

The affected individual may also have diarrhea and bloating and will feel constantly fatigued and lethargic. It is estimated that around 3 million Americans are at increased risk for developing celiac disease due to various vitamin and mineral deficiencies and the numbers are constantly increasing [1].

Endometriosis: Stomach pain, gas, and bloating are quite common in females during their menstrual periods. However, in cases of endometriosis the tissues that line the uterus start to grow outside of the uterus. This results in severe pain in the stomach especially at night and abdominal cramping which is observed mainly during the menstrual periods [1].

This condition however is mostly seen in children and can be relieved by over-the-counter medications and avoiding allergens. Studies suggest that food allergies have been on the rise in children in the last decade or so [1].

Some of the other causes of stomach pain at night include

Gas: This occurs when digestion slows down at night and causes stomach pain.

Constipation: This is also one of the most common causes of stomach pain at night. The pain occurs due to accumulation of waste products in the colon which causes excessive strain on the abdomen resulting in pain [1].

Even though it is rare but sometimes stomach pain at night which comes on suddenly and does not have a known cause is a sign of a serious underlying medical condition. These medical conditions include [1]:

Appendicitis: This is quite a serious medical condition in which the appendix gets infected and inflamed and finally ruptures causing its contents to leak into the abdominal cavity. An appendix rupture normally requires immediate treatment generally in the form of surgery [1].

The primary presenting feature of a ruptured appendix is severe pain that starts around the umbilical area and then radiates towards the right side. The pain usually worsens with any attempts at movement or bending forwards. This pain usually worsens at night when sleeping [1].

Cardiovascular Conditions: In rare cases, certain cardiovascular conditions also tend to cause stomach pain at night. Additionally, the individual will have increased pulse, profound sweating, and problems with breathing. There will also be pain and weakness observed in the left arm and hand. This is again an emergent medical situation and should be addressed immediately [1].

Kidney Stones: This is also one of the causes of stomach pain at night. Renal stones will cause sharp stabbing pain starting at the midback and then covering the entire abdominal area. The affected individual will also have hematuria as a result of kidney stones [1].

Hiatal Hernia: This condition also at times causes stomach pain at night. This occurs when a portion of the stomach crosses over to the chest cavity. The pain tends to get worse with lying down [1].

Food Poisoning: This is also one of the common causes of stomach pain at night. Pain caused due to food poisoning will be sharp and excruciating and will be accompanied by diarrhea, vomiting, and nausea. If the symptoms do not resolve within a span of 24 hours then the individual should proceed to the emergency room for immediate treatment [1].

Coming to treatment options in majority of the cases stomach pain at night can be easily controlled by lifestyle modifications and over-the-counter medications. The medications are usually taken for relief of gas and indigestion. It is also important to avoid hot and spicy food and consume alcohol only in moderation. This should be done especially before going to bed to prevent stomach pain at night [1].

If an individual has stomach pain at night that does not resolve to standard measures then a consultation with a physician is required. The physician will carry out various tests to come up with an accurate diagnosis of the stomach pain and treat the condition accordingly [1].

In majority of the cases, however, pain relief is obtained by taking over-the-counter medications. Additionally, certain lifestyle modifications like avoiding eating food close to bedtime and consuming alcohol in moderation can also help in preventing stomach pain at night [1].