Stomach Flu which is also known by the name of gastroenteritis is a gastrointestinal condition caused mainly by viruses like Norovirus and Rotavirus but can also be caused by bacteria like E. coli and Salmonella. Stomach Flu causes the GI tract to get inflamed resulting in a variety of symptoms such as vomiting, persistent diarrhea, fever, and weakness. Stomach Flu is common in both adults and children alike. The symptoms of Stomach Flu basically last for a couple of days, but while the symptoms are at their peak the affected individual will feel miserable and is essentially bedridden until the symptoms start to fade away. During this time, it is important for the individual to stay hydrated and diet becomes a concerning issue. This article gives a brief overview of what are the foods to take and what are the foods to avoid when infected with Stomach Flu. 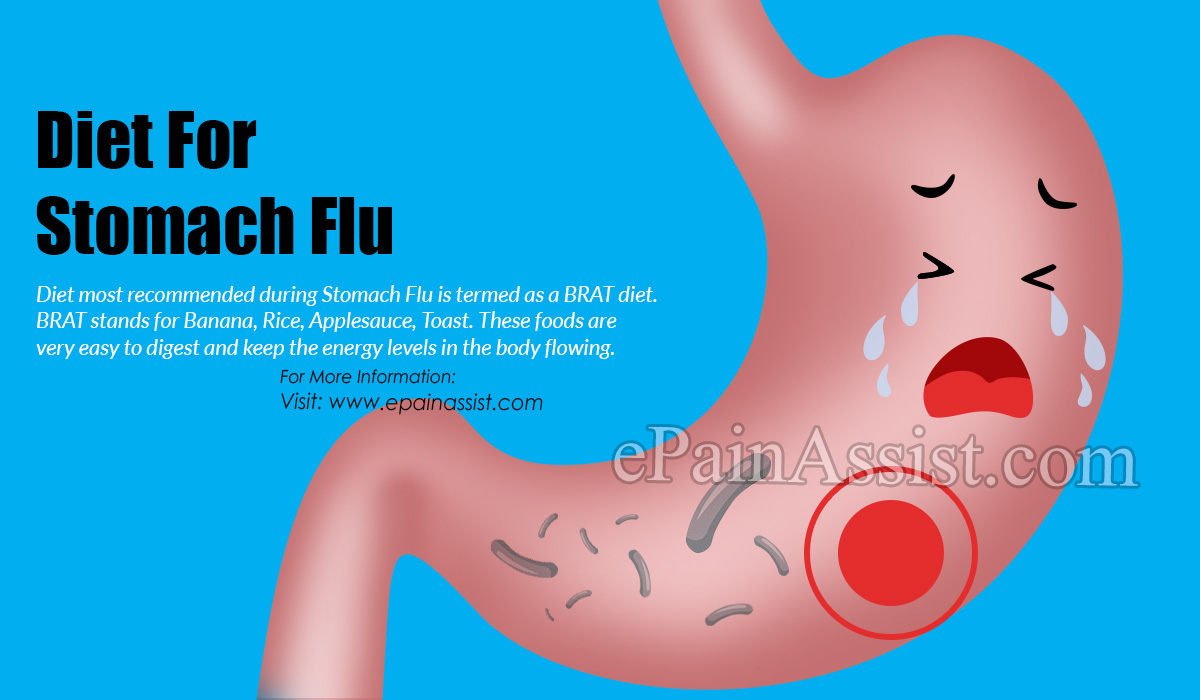 Essentially when an individual is suffering from Stomach Flu, it becomes very difficult for that individual to keep anything, whether it is a solid or liquid, down due to persistent nausea and vomiting and a general sense of ill health, which poses a risk for dehydration. Thus, a diet which is easy for the stomach to digest along with plenty of fluids to keep the individual hydrated is recommended.

Foods to Take When Infected With Stomach Flu:

Diet most recommended during Stomach Flu is termed as a BRAT diet. BRAT stands for Banana, Rice, Applesauce, Toast. These foods are very easy to digest and keep the energy levels in the body flowing. They contain carbohydrates, which not only give energy but also replenish nutrients that the body loses because of Stomach Flu.

Bananas are not only easy to digest, but also have plenty of potassium which is lost as a result of vomiting and diarrhea caused by Stomach Flu. Similarly, White Rice is also quite easy to digest and provides energy from the carbohydrates it has. Applesauce not only provides energy from the carbohydrates that it has, but it also has pectin in it, which helps immensely with the diarrhea caused by Stomach Flu. White Bread toast is also very easy on the stomach and is digested quite quickly and keeps your energy levels flowing and hence is quite good during Stomach Flu.

The foods mentioned above provide the body the required nutrition, so that the vital organs of the body do not get affected as a result of Stomach Flu. They also help add bulk to the stools, which in turn causes the frequency of the diarrhea to reduce. Once the symptoms have gone down you can add fruits, vegetables, or potatoes back into the diet gradually as the stomach slowly recovers from Stomach Flu.

Foods To Avoid When Infected With Stomach Flu

There are also certain foods that need to be avoided when an individual is suffering from Stomach Flu. These foods are basically those, which are hard to digest like fatty or oily foods, spicy food, dairy products like milk or yogurt and any foods which are rich in fiber. Milk and other dairy products might not pose a problem for anyone, but they are a bit hard to digest and they also have a tendency to aggravate the diarrhea, which is caused due to Stomach Flu.

An individual with Stomach Flu will have persistent diarrhea and eating excess fibers like brown bread or brown rice may aggravate the frequency of diarrhea and make the individual more ill. Eating foods like meat, bacon, or oily foods again are extremely hard to digest and may intensify the vomiting and diarrhea episodes in Stomach Flu. Spicy foods are quite hard to the stomach and may intensity the symptoms caused by Stomach Flu and thus, need to be avoided.

Apart from the foods mentioned above it is highly recommended to stay away from caffeine, alcohol, smoking, fried foods, fast foods like burgers or pizzas, broccoli, and onions. This is recommended for a few days even after the individual may have recovered from the condition as the stomach takes some time to heal after battling Stomach Flu.