Paraneoplastic syndromes take place whenever any cancer causes few of the unusual symptoms because of the presence of substances circulating within the bloodstream. These substances refer to hormones produced by the affected tumor or antibodies produced by the human immune system. Paraneoplastic syndromes affect the functions performed by various organs and tissues, while cause symptoms at distant sites from the affected tumor.

Particularly, the syndromes affect different organ systems, which include the hormone or endocrine system and the nervous system, both of which cause various problems in the form of changes in the nervous system, diarrhea, low blood sugar levels, and hypertension or high blood pressure. Approximately 20percent of cancer patients develop the problem of paraneoplastic syndrome and common types of cancers to cause the problem include the most common one i.e. lung cancer, blood cancer, kidney cancer, breast tumors, pancreatic cancer, stomach cancer and ovarian cancer.(2) 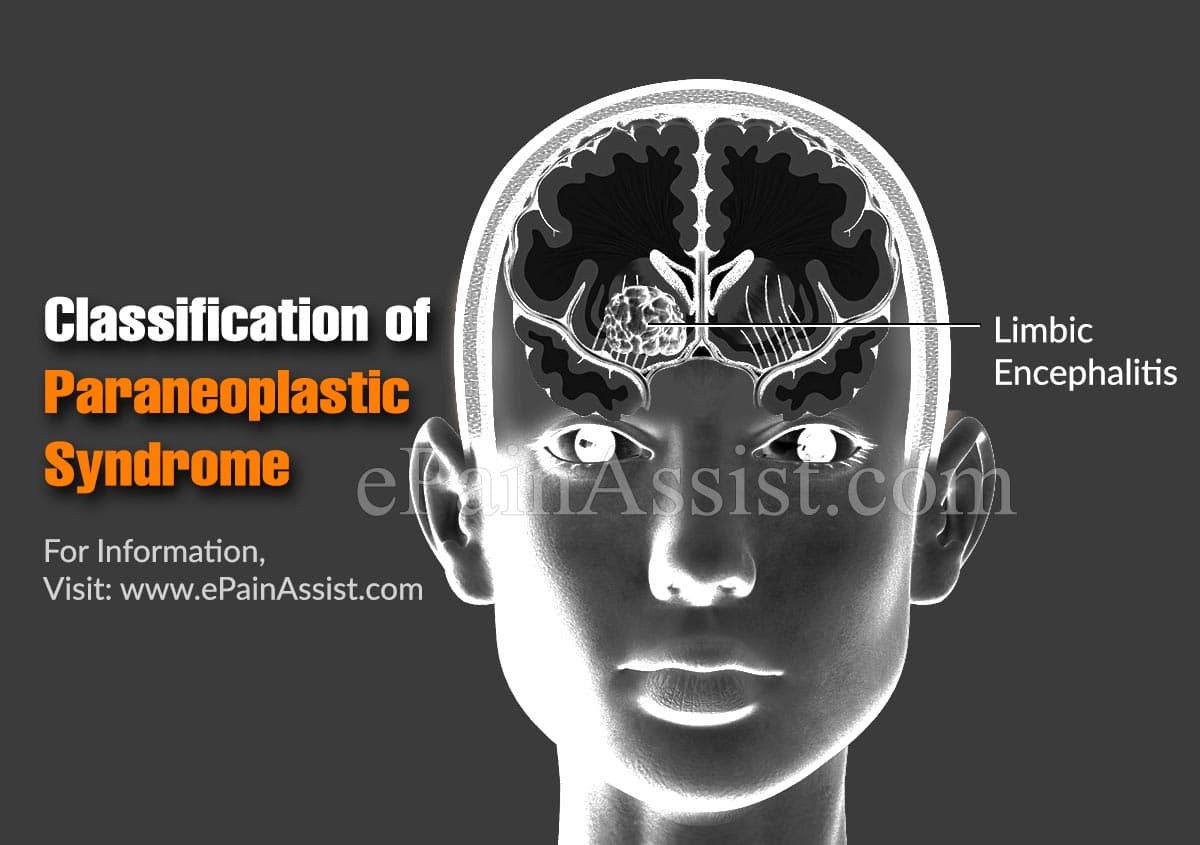 Paraneoplastic syndromes may take place in any of the following types-

Encephalomyelitis syndrome consists of both spinal cord and brain inflammations. Depending on a particular affected area, patients may experience varieties of signs and symptoms.

Opsoclonus Myoclonus type of paraneoplastic syndrome occurs because of the cerebellum dysfunction and its related connections. The problem causes irregular and rapid eye movements referred to as opsoclonus syndrome and chaotic as well as involuntary muscle jerks i.e. myoclonus syndrome in the trunk and limbs.

Stiff man syndrome type of paraneoplastic syndrome characterizes the severe and progressive type of muscular stiffness or rigidity and it mainly affects the legs and spine. Even in some cases, the syndrome causes muscular spasms with severe pain.

Myelopathy indicates a syndrome of injury, which remains limited to one’s spinal cord and depending on the injury level, a patient may have changes in his or her bladder function or bowel. Even the patient experiences numbness and severe weakness in the body.

Lambert-Eaton Myasthenic syndrome often takes place due to disrupted communication between muscles and nerves. Common signs and symptoms of the syndrome are a weakness in the low extremity and pelvic muscles, difficulty in swallowing food, fatigue, difficulty in communication, double vision and irregular eye movements. Besides this, a few patients also have problems associated with the autonomic nervous systems, such as impotence and dry mouth. In most of the cases, Lambert-Eaton Myasthenic type of paraneoplastic syndrome takes place in patients with lungs cancer.

Myasthenia gravis has relations with disrupted communication between muscles and nerves, while it characterizes rapid fatigue and weakness of any specific muscle, which remains under voluntary control. Common muscles, in this case, are muscles of your eyes, face, legs, and arms. Myasthenia gravis syndrome has an association with the thymus gland cancer.

Neuromyotonia or Isaacs syndrome characterizes abnormal impulses in various nerve cells, which remain outside of the spinal cord and brain i.e. peripheral nerve hyperexcitability to control the muscular movements. These impulses may result in muscle riping and twitching, which looks more or less similar to any bag containing worms, muscular cramps, progressive stiffness, slow movement, and other muscular impairments.

The condition of peripheral neuropathy implies various patterns of nerves patterns, which transmit messages from the spinal column or brain to other parts of one’s body. When the damage takes place in only the sensory nerves of the patient’s peripheral nervous system, you experience pain and other sensation disturbances in almost every part of your body.