Can You have Fever with Irritable Bowel Syndrome?

Irritable bowel syndrome (IBS) is a common long term condition of the digestive system that targets the intestine (colon).

Irritable bowel syndrome can lead to bloating or bloated feeling, gas, stomach cramps, diarrhea and or/constipation, mucus in the stool. Symptoms that could be indicating a more serious condition include among the following rectal bleeding, abdominal pain that progresses at night and weight loss.

Irritable bowel syndrome causes pain and discomfort in the abdomen (this is the area below your chest and above the hip joints). It also leads to frequent diarrhea and constipation problems and pain that comes and disappears over a long time. Abdominal pain is sometimes portrayed as general pain with or without cramps; dull gas-like, sharp, and common pains are frequent. 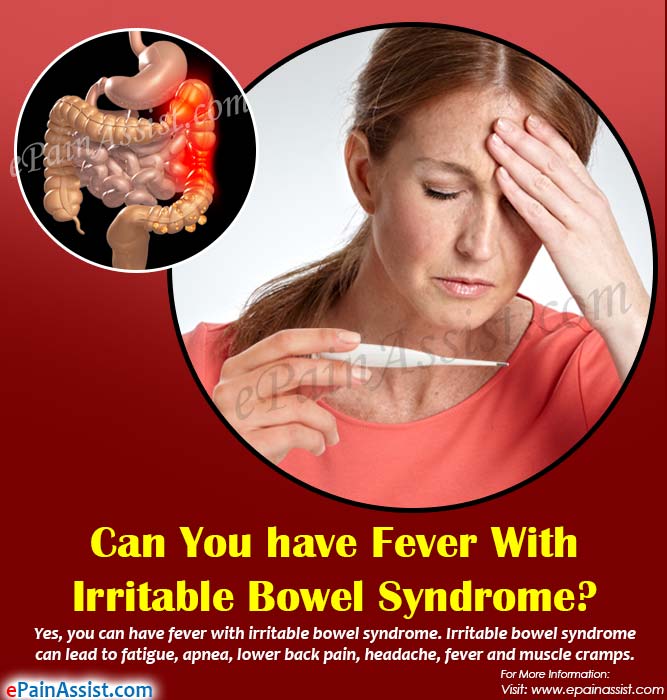 Can You have Fever With Irritable Bowel Syndrome?

Symptoms of IBS sometimes seem contradictory such as alternating diarrhea and constipation. Abdominal functioning of nerves and muscles of bowel leads to irritable bowel syndrome, this is associated with deregulation between the brain, the gut and the central nervous system that causes the bowel to become over sensitive to stimuli and sometimes respond under normal circumstances, although irritable bowel syndrome does not cause permanent damage to the colon despite the fact that, it’s a relatively disorder that is completely unpleasant and it is serious as it affects the normal routine of daily activities.

Irritable bowel syndrome starts with a case of gastroenteritis during which the body develops one and then a second set of antibodies that irritate the bowels. Irritable bowel syndrome is a result of persistent and troublesome bacteria that takes advantage of a depleted micro biome following food poisoning or other forms of viruses.

People suffering with irritable bowel syndrome may find themselves avoiding socializing for feeling embarrassed or being afraid of an attack that could come by. Sometimes conventional medicines helps in reducing the symptoms and one can end up feeling depressed, frustrated and anxious although it generally takes time and persistence to heal from it entirely by making changes on diet and lifestyle. In addition several natural supplements will enhance healthy environment for those symptoms and sometimes the irritable bowel syndrome occurs after sometime and somehow it might be though difficult to diagnose as the symptoms range from mild to severe and other times may be chronic and it actually vary from one individual to another.